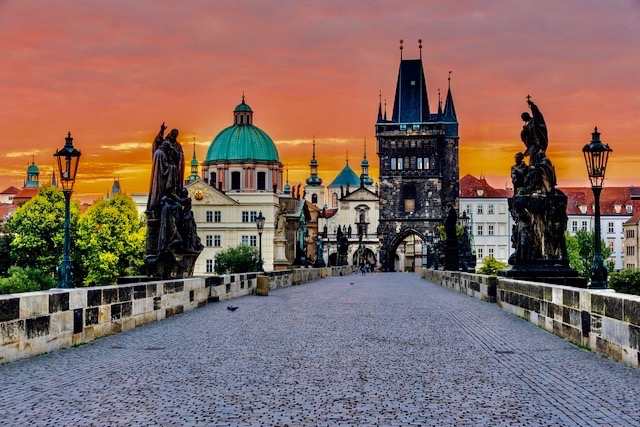 First published at AIER and posted here with thw kind permission of the author.

I am currently (August 4–10) in Prague teaching at CEVRO Institute’s PPE MA program. This program, designed by Professor Josef Sima, is an international program that invites students from across the globe to intensely study in Prague and work with a variety of faculty from throughout Europe and the U.S. who teach in the program. It truly is an awesome educational venture that Professor Sima has put together. For a video discussing the program, see this short clip from last year. And this year’s experience for me was no different.

Each year I have taught in the program I shuffle up my readings and my lectures. But my assigned topic is the same: economics and politics of institutions. Yesterday, I spoke about the Liberal Project and the challenges of our times. I asked the students what they thought the greatest challenges were today to the Liberal Project.

The doctrines associated with this project include freedom of conscience and thought, freedom of association, freedom of trade, freedom of movement, etc. It is a social philosophy that seeks to find that set of institutions that enables diverse populations to live better together than they ever could in isolation, and to do that those institutions must exhibit neither domination nor discrimination. They must pass a generality test.

With that presentation on the table and leaving aside for the moment the question of whether this project was best fulfilled by a variety of democratic systems or some more radical system of self-governance, the students listed one by one what they thought were the most important challenges. Now, I will be the first to admit that my sampling is biased — a small group of self-selected students who decided to spend a year in Prague studying and debating ideas in philosophy, politics, and economics is not a cross-section of the population. But there is something to be learned. Most of the challenges were what the students saw as internal contradictions within the Liberal Project, and weaknesses in the rhetorical strategy of classical liberals. Some of the criticism was that classical liberals seemed to privilege economic explanations over all other explanations of the social world, and they found this too sterile, too atomistic, too amoral, and, most importantly, too off-putting to non-Western styles of thought.

As I wrote all these points on the board for us to discuss, I kept thinking to myself what was behind their choice of challenges — intellectual, practical, some mix of both. When pushed, however, the strongest voices expressed frustration with extreme left voices and policies in their societies that they argued had given rise to the right-wing counter-reaction. A minority of students saw the right-wing views as an insidious invasion into the liberal project that was as dangerous or more so than any left-wing views. Perhaps the most Misesian of the group made the brilliant observation that perhaps as economists we should restrict our analysis to means/ends, show sincere sympathy with the ends of left-wing intellectuals and activists that dominated the public conversation in these European societies, but demonstrate through means/ends analysis that perhaps their policy choices are not the most effective for obtaining the ends they seek in terms of eradicating poverty, providing health care, improving the environment, etc.

I couldn’t agree more with that, and not just as a rhetorical strategy. For many years I taught an honors course at New York University where we used Adam Smith, Alfred Marshall, and Joseph Stiglitz as the main texts. I asked the question to the class: what are the continuities and discontinuities in economic thinking from 1776 to the 1990s (when I was teaching the class)? The main continuity as reflected in Smith, Marshall, and Stiglitz was an overarching concern with the least advantaged and the quest to find those policies that would improve the lot in life for those less fortunate — policies, I should add, that were both scalable and sustainable.

It turns out one of the most important lessons that political economy and social philosophy teach is that while there are an almost infinite number of ways for people to choose to live, there is actually a far more restricted set of institutions that enable individuals to live together in peace and prosperity. And that recognition was what gave birth to liberalism, and it is a doctrine aspiring at universal application.

Like all of my persuasion, I am concerned with the rise in popularity of socialist ideas. I also think everyone is forgetting that the modifier democratic doesn’t protect socialism from its internal contradictions and operational dysfunctions. We have been here before. The British socialists that Hayek argued with might have been more enamored by the fetishization of science than their counterparts today, but they also modified their brand of socialism with the term democratic. And they argued that the reason why they were socialists in their economics was precisely because they were liberal democrats in their politics. The capitalist economy, in their minds, had proven too craven for the liberal society to be sustained. Left to its own devices, capitalism was unstable, resulting in unemployment; it was monopolistic, resulting in inefficiency and inequality. Instability, inefficiency, and injustice were what unbridled capitalism delivered, and thus immiseration of the least advantaged. As I argued in an earlier column here at AIER, this is what Hayek applied pen to paper to try to counter with The Road to Serfdom. And it is one reason that the book remains so relevant to the current generation.

But I don’t think my students in Prague (or in Fairfax) appreciate enough both how the right-wing populist assault on markets is as (if not more) dangerous to the Liberal Project as those from the left, and how, as Hayek demonstrates in The Road to Serfdom, the left- and the right-wing criticisms of the Liberal Project dovetail with one another in the tragic playing out of socialism in practice — whether we call it “democratic socialism” or “market socialism,” it is the socialism part that causes the problems. The tragic aspects of the tale in The Road to Serfdom must be understood clearly by all — Hayek does not tell a tale of malevolent forces derailing civility, but of how the most sincere and benevolent of intentions are betrayed in the operation due to systemic incentives and the distortion of the information utilized in the effort to coordinate activity.

The odious presentation of nationalistic arguments one reads within populist movements threatens to strangle the primary sources for peace and prosperity — technological innovation and expansion of trading opportunities throughout the globe. Socialist policies have the same result of stagnating technological development and curtailing the pursuit of trade throughout the world. In both cases — one intending to turn inward, the other intending to turn outward — the end result is an unhealthy insulating and isolating turn, and a rejection of the Liberal Project of cosmopolitanism.

And with that, I fear, the emancipation project is lost, and those bonds of oppression that were broken through struggles are reintroduced in the most unsuspecting ways so that the elites once more are empowered to place their boot firmly on the neck of the least advantaged.

My position is the opposite. What is needed today is a restatement of Hayek’s argument in a way that can resonate with our times, to address those legitimate concerns that critics of liberalism have raised, and to walk through carefully and with precision the organizational and situational logic of the proposed policy changes. But, again, not as a matter of rhetoric but as a matter of deep liberal commitment, I would argue this must be done with great sympathy for the goals of the intellectuals and activists, and with great empathy for the plight of the least advantaged. As I have stressed in several recent essays, one must always remember liberalism is above all else liberal.

And that Liberal Project is about emancipation from the bonds of oppression — whether the source of that predation comes from the public sector, the private sector, or the independent sector. The Liberal Project operationalized is about the quest for that set of institutions which does not require mystical beings to institute them, or to live under their rule, but relies only on the ordinary assumptions of basic economics for their operation, and which break those bonds of oppression and open the possibilities for diverse individuals to pursue their often divergent plans for betterment and to do so in a way that enables them to live better together than they ever could in isolation. The ability of individuals to pursue productive specialization and realize peaceful social cooperation is a consequence of institutional arrangements — the Liberal Project is tied to that set of institutions that maximizes that opportunity and coincides with emancipation and human flourishing.

The next generation must be ready to restate, and more importantly rework, the foundational arguments. Programs like the PPE program at CEVRO Institute are fertile ground for developing those necessary skills. Congratulations to Professor Sima for his leadership in this endeavor.

Peter Boettke, a Senior Fellow at AIER, is a University Professor of Economics and Philosophy at George Mason University; the BB&T Professor for the Study of Capitalism, Vice President for Research, and Director of the F.A. Hayek Program for Advanced Study in Philosophy, Politics, and Economics at the Mercatus Center at GMU.

Logical consequences are the scarecrows of fools and the beacons of wise men.Thomas Henry Huxley … (next quote)
%d bloggers like this: