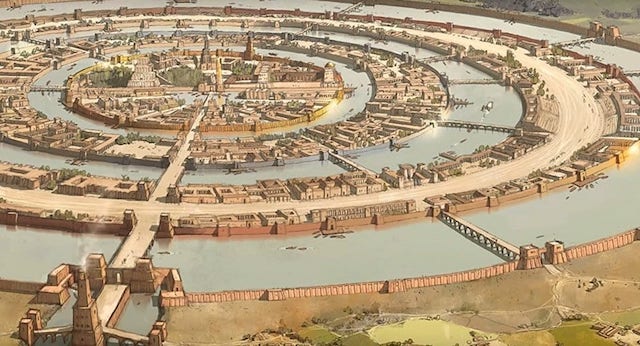 Just last month, a 23-year-old mechanic from Peterborough, Canada discovered Atlantis in the Bahamas by looking at satellite photos on the Internet.

“I was researching a TV show on the Bermuda Triangle,” he told Tough Call recently, “using the Nasa Earth Observatory to look for planes or boats on the ocean floor. Crossing the Bahamas I saw what looked like the rings and canal I remembered from a show about Atlantis. It has never been proven, so who’s to say that I didn’t find it!”

Chris is the latest of a phalanx of professional and amateur explorers who have located the lost city in just about every corner of the globe in the 123 years since Minnesota congressman Ignatius Donnely published his famous book, Atlantis: the Antediluvian World in 1882.

It was an instant bestseller and has remained in print ever since, inspiring generations of enthusiasts. Experts say it is one of the best constructed Atlantis theories ever made.

Donnelly used similarities between different cultures to show that human civilisation had spread out across the planet from a single origin – the now sunken city of Atlantis. He also tied the destruction of Atlantis into global flood myths, which all say that a few survivors of a worldwide cataclysm restarted civilization.

“We thus find the sons of Ad at the base of all the most ancient races of men,” Donnelly wrote, “(who) traced their beginning back to a dimly remembered Ad-lantis. Who shall say that one hundred years from now the great museums of the world may not be adorned with gems, statues, arms and implements from Atlantis.”

Donnelly’s account draws on the original 360 BC narrative by the Greek philosopher, Plato, that most experts regard as a parable. Plato wrote that when the gods shared out the earth, “Poseidon, receiving for his lot the island of Atlantis, begat children by a mortal woman, and settled them in a part of the island.”

Then, according to Plato, the legendary island in the Atlantic with its advanced civilisation was sunk by an earthquake about 11,000 years ago. And that is the origin of the Atlantis myth.

But ever since the publication of Donnelly’s book, assorted occultists, writers, travellers and potholers have assigned immense importance to the idea of Atlantis. And the sunken city has been pinpointed in sites around the world – from Bimini, to Cuba, to Cyprus, to Malta, to Bolivia, to Indonesia, to Finland, to Antarctica, to the Azores, and even to Ireland.

A Swedish geographer published a book last year which claims that the measurements, geography and landscape of Atlantis as described by Plato match Ireland almost exactly: “I am amazed no one has come up with this before,” he said, arguing that the idea that Atlantis sank is a racial memory from the flooding of the Dogger Bank, an isolated shoal in the North Sea submerged by rising sea levels thousands of years ago.

But of most interest to us, for the sake of tourism if nothing else, is any evidence that Atlantis has been found in the Bahamas. And even in our small part of the world, there are a multitude of options to choose from.

In 1968 Florida biologist J. Manson Valentine investigated the so-called “Bimini Road,” a series of rectangular stones, laid out in two straight parallel rows in less than 15 feet of water off the western shore of north Bimini. This became linked to a 1930s prediction by the American psychic Edgar Cayce that a portion of Atlantis would rise in Bimini in 1968 or 69.

Although the suggestion that this was a man-made feature was disproved in the early 1970s, the Edgar Cayce Foundation went on to commission Dr David Zink, a professor of English who was also an expert diver, to lead an expedition to Bimini in the summer of 1975.

Zink’s team discovered pieces of fluted marble near the Bimini Road that he took to be antediluvian artifacts. They were old ship ballast, but he immediately pronounced the area a “megalithic site”, with a “sacred geometry” like Stonehenge. These claims initially attracted wide attention.

So much so, in fact, that then Senate President Dr Doris Johnson got into the act, forming the short-lived Bahamas Antiquities Institute to raise money for treasure hunting. Zink was appointed director of the Institute and starred at the opening of its “museum” at the corner of Kemp Road and Shirley Street in 1976. Tough Call was one of the writers on hand to interview him at the time.

“By sacred geometry, I mean that the Bimini Road site possesses certain crucial terrestrial and astronomical orientations that are inherent in its original function,” he explained earnestly to a fresh-faced yours truly. “However, the onus is on the researcher to prove such a claim.”

In an effort to do just that, Zink published a book about his Bahamas expeditions in 1978 called the Stones of Atlantis,. It was billed as “the first authoritative report on the strangest archaeological discovery of our time.” But he spoiled things by bringing in psychics who claimed that the Bimini site was constructed by extraterrestrials from the Pleiades.

The Bimini Road’s archaeological pedigree was most-famously debunked by Eugene Shinn, of the US Geological Survey. Shinn confirmed that the so-called “road”, “wall” or “harbour” was nothing more than naturally fractured beach rock submerged by rising sea levels. Similar patches of “blocks” can be found throughout the Bahamas and in many other countries.

“Rising sea level is well established,” Shinn said in 1978. “Ten thousand years ago the Bahama Banks were dry land. There’s no problem with that. There’s a good possibility that archaeological sites will be found. But so far there’s never been a bona fide artifact of any kind to suggest a civilisation.”

Conventional archaeologists agree, viewing the whole thing as a publicity stunt. But others argue that Bimini is not the only place in the Bahamas where evidence of Atlantis has come to light.

In 1968, private pilots sighted a rectangular object in the shallow water off Andros. Explorers pronounced it to be an ancient temple, but this theory collapsed when an elderly Androsian came forward to say he had built a sponge pen at the site years ago.

In 1970, one Dr Ray Brown from Arizona claimed to have discovered a pyramid-like structure while scuba diving off the Berry Islands. He supposedly retrieved a” crystal sphere” from an interior chamber that he periodically exhibits at psychic conferences.

In 1978, a boat captain named Don Henry found evidence of a “colossal submerged pyramid” between Bimini and the Cay Sal Bank using side-scan sonar. The structure is said to lie on a flat sea bed in 1200 feet of water. The sonar tracings showed it to be 780 feet high – bigger than terrestrial pyramids – but little more has been heard of this claim since.

In 1989 “zoomorphic mounds” were reported on Bimini. These were sand spits surrounded by mangroves and other vegetation in the shape of a 500-foot-long shark. and a whale. Because they could only be seen only from the air, some researchers called them prehistoric archaeological sites. But no cultural evidence has ever been found and most scientists consider them perfectly natural features.

In the 1990s, William Donato formed the Atlantis Organization and undertook a series of side-scan sonar surveys in the Bahamas funded by Cayce enthusiasts. Donato said he identified a number of “anomalies” and hidden structures on the sea bed, particularly around Bimini.

More recently, an underwater stone platform was discovered off Nicoll’s Town, Andros. According to Dr Greg Little, of the Cayce-linked Association for Research and Enlightenment, this may be the ruins of an ancient harbour breakwater. The structure is about 150 feet wide and 450 yards long – similar to ancient harbours in the Mediterranean, he says.

And if you have ever wondered what the Americans are doing at their AUTEC naval base on Andros, do we have news for you! AUTEC is actually an “underwater Area 51” – a reference to the celebrated top-secret air base in Nevada that is supposed to be investigating alien spacecraft as we speak.

According to accounts, “magnetic deviations” have been discovered that are caused by micro-wormholes that could have helped create Andros’ famous blue holes. The AUTEC base is said to be carrying out secret research on these wormholes – theoretical “transit tunnels” between different dimensions.

In fact, noted British cave diver Rob Palmer (who explored blue holes in the Bahamas for years and died in the Red Sea during 1997) is said by one Internet account to have been killed because he knew too much about these activities on Andros.

Why is the Atlantis myth so compelling? Well, the idea that somewhere there is a lost civilisation that has remained completely discovered does appeal to our natural sense of wonder. There is also the folk-memory of rising sea levels after the last ice age 10,000 years ago that produced the flood myths of many cultures.

But we can’t overlook the fact that the Bahamas sits right where Plato said Atlantis was – an island in front of a continent at the other end of the great western sea beyond the Mediterranean’s pillars of Hercules.

This article was first published in The Tribune on Wednesday, May 18, 2005.