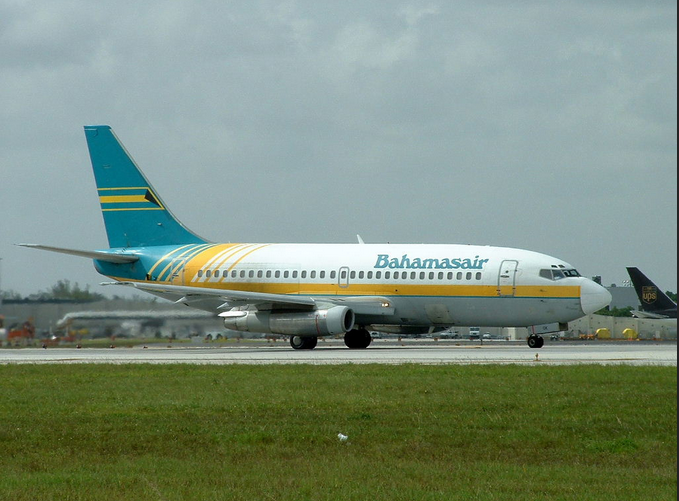 Works Minister Bradley Roberts recently trumpeted the fact that Bahamasair had cut its losses to “only $13 million a year” and was set to become the “airline of choice”.

He went on to make the following disingenuous comment: Sir Clement Maynard (Minister of Tourism and Aviation when Bahamasair was formed) “had the right idea all along…but the ship was hijacked for 10 years and now my government (will) implement what (he) envisioned from the very start.”

Minister Roberts claimed Bahamasair was now operating more like a business, “and not how it operated for the terrible political years of 1992 to 2002. The nightmare era for Bahamasair is over.”

Well, having lived through Bahamasair’s entire sordid history, those remarks sparked a closer review of the facts.

The airline was born from a huge political scandal. And the plain fact is that it has wasted hundreds of millions of tax dollars over the past three decades, entirely for political reasons, and without achieving anything other than a reasonable safety record.

If you believe Bahamasair’s web site, the airline “came about as a result of the discontinuation of service by British Airways in 1970 and Pan American Airlines in 1973 due to the fuel crisis.”

(Yes folks, that IS an accurate quote. See www.bahamasair.com.)

But the truth is that the late Everette Bannister, for years the PLP’s most flamboyant fixer, was the cigar-smoking midwife at Bahamasair’s birth. It all began in 1968 when Bannister formed Bahamas World Airlines in the law offices of none other than Messrs Pindling & Nottage.

At the time, Bahamas Airways Ltd (founded in 1936 by Sir Harry Oakes), was owned by the Swire Group, a British conglomerate which also owned the very successful Cathay-Pacific Airlines.

Swire had acquired BAL from British Overseas Airways Corporation in 1968. BOAC had bought BAL from Pan American Airways after the Second World War. Pan Am had owned BAL during the 1940’s.

Bannister’s BWA played a starring role in the demise of Bahamas Airways…it was a major scandal in its day, but the Progressive Liberal Party’s epochal 1967 victory gave the new government so much clout that it could easily ignore the noise in the market.

Bahamas Airways closed in October, 1970 – exactly two years after the Swire Group took over. Swire lost millions in those 24 months and was counting on government approval for long-haul routes to salvage the airline. It also offered the government a majority stake in the operation.

But the Pindling administration was locked in a complicated political tryst with Bannister’s BWA, which (although only a paper company) wanted the same long-haul routes sought by Bahamas Airways. The prime minister later claimed he did not have time to evaluate the Swire Group’s offer of 51 per cent participation in a going concern.

So, seeing the writing on the wall, Swire put Bahamas Airways into liquidation. Eastern Airlines and Pan Am took up the slack internationally, while Out Island Airways and Flamingo Airlines operated domestically.

Flamingo was spun-off from Bannister’s BWA (which, incidentally, never flew any scheduled flights) under the ownership of PLP Senator Cadwell Armbrister. This was part of the plan to create a new state airline from Bahamian aviation pioneer Ed Albury’s Out Island Airways and other local aviation assets.

The plan was loosely based on the recommendations of American consultants that had been retained by the government after the collapse of Bahamas Airways. The creation of a national carrier was promoted as an essential part of the government’s aggressive Bahamianisation campaign.

The consultants’ report called for a combination of local public and private sector ownership linked to an international carrier. But, despite early government assurances to the contrary, this was not to be.

So Albury’s successful Out Island Airways was taken over by the government and transformed into Bahamasair in June, 1973. A separate deal was cut with Cadwell Armbrister’s Flamingo Airlines, but this was never fully disclosed.

Within months the new national carrier became the focus of jokes and political mudslinging. Even Tourism Minister Clement Maynard stood up in parliament and called the airline’s initial performance “appalling”.

There followed a succession of (mostly American) consultants and general managers – from Max Healey to Presley Ellsworth to Mel Sibulkin to Larry Stanley to Walter Johnson to Aubrey Curling (appointed in 1980 as the first Bahamian manager) to Carlton Cartwright, to Barry McInnes. Some of these men quit or were fired under pressure for urging the government to stay out of the airline’s business.

Sibulkin, a former US marine colonel, caused a big ruckus when he said publicly that the government should either allow the airline to function or shut it down. And despite the PLPs rationale that Bahamasair was necessary for Family Island tourist operations, experts pointed out that the islands it serviced showed drastic declines in arrivals compared to those served by private carriers.

Meanwhile, the airline’s losses mounted. They were $1.8 million in 1973, another $1 million in 1974, $2.4 million in 1975 and over $4 million in 1976. But these were gross underestimates because they took no account of fees and taxes owed to the government. And the cash crisis was made worse by ongoing pay rows with pilots, air crew and ground staff.

“The complete and absolute incompetence of the PLP has been brought to light in connection with the set up and administration of Bahamasair,” opposition MP Mike Lightbourne charged in parliament in 1976.

At the time, even Prime Minister Pindling admitted the airline was “overstaffed at top and bottom”. But this did not stop him from pouring another $20 million into the airline so that it could service ‘more profitable’ long haul routes to the US.

Ed Albury finally quit as deputy general manager in 1976 – in the middle of a bitter contract fight with pilots (former FNM finance minister William Allen was the airline’s chairman at the time). That same year there was a controversy over the leasing of three obsolete DC3 aircraft; the first of many scandals involving Bahamasair planes.

The 1979 oil crunch following the Iranian revolution presented Bahamasair with massive price hikes and fuel rationing. Flights were initially scaled back, but the airline managed to introduce long-haul service to Atlanta. It was the first major route expansion (other than to Haiti) since 1973.

Many of the airline’s labour problems disappeared in 1979 when union leaders Reg Grant and Frank Carter were co-opted as managers. But waste, inefficiency and corruption continued to be the order of the day at Bahamasair.

The net loss increased from almost $5 million in 1985 to over $10 million in 1990 (although precise figures were unavailable because audited accounts weren’t being produced). Despite all this public money, the airline couldn’t operate even at a basic service level – in 1985 less than 20 per cent of all flights were on time.

Meanwhile, Bahamasair was burning out one aircraft engine per month, at a cost of $250,000 each (according to the 1995 Commission of Inquiry report). But its board – at that time led by Transport Minister Philip Bethel – recorded no discussion of any remedial action.

Despite Prime Minister Pindling’s 1975 assertion that the airline was overstaffed, the number of employees almost doubled in the second half of the 1980s. Outside consultants pegged the cost of the excess workforce at $2.5 million per year. Even former union leader Reg Grant admitted that there was “considerable” overstaffing.

The purchase of five Dash 8 aircraft from De Havilland of Canada in 1991 was the subject of a complex deal involving many third parties, in which Bahamasair chairmen (and senior cabinet ministers) Philip Bethel and Darrell Rolle were found by an Inquiry to have received “illegal payments”. However, this finding was later quashed by the supreme court.

But according to Bahamasair’s web site: “Much success was attained in the 1980s, but as the airline entered the 90s, it began to experience major difficulties, one of which was the loss of revenue and escalating costs.

“The directors discovered that the company was losing money on routes into Washington, Philadelphia and New Jersey…The decision was made to stop services to these three destinations…Despite their efforts, the airline continued to lose money.”

Make what you will of this mangled prose from some amateur politico attempting to rewrite history.

And in the latest instalment of this long-running saga, the new PLP government has pumped another $7.2 million into Bahamasair to buy more Dash 8 aircraft.

Paul Major – the current general manager – has acknowledged that Bahamasair lost money for the past 30 years and should be privatised. In the meantime, the plan is to outsource unprofitable routes to small carriers and seek more profitable long-haul routes…have we heard this before?

According to some editorial writers, the measure of Bahamasair’s achievement over the years is that it is no longer the “target of derision”.

But to Minister Roberts (a savvy businessman), the measure of achievement lies in the fact that the airline “may” lose only about $6 million in the upcoming fiscal year:

<p.”Oh what a happy day that would be,” he chortled recently.

The column ‘Tough Call’ by Larry Smith is published in The Tribune every Thursday and is reprinted here as a courtesy. Mr. Smith founded and successfully grew an advertising agency over 20 years. Under his direction Media Enterprises diversified into short-run commercial printing and publishing, and is now the largest non-fiction book wholesaler in the Bahamas. He has 30 years experience as a journalist and publicist and has contributed numerous articles and columns to the Bahamian press. A former reporter at the Nassau Guardian, local correspondent for Reuters and editor at the Bahamas News Bureau, he conceived and edited the Bahama Almanac (published 2000 by Media Enterprises), wrote the commentary for Mike Toogood’s Portrait of an Archipelago (published 2004 by Macmillan Caribbean), and edited the Bahamas Environmental Handbook (published 2002 by the government). In 2003 he took a year’s leave of absence from Media Enterprises to lead a transition management team at the Nassau Guardian after the paper was acquired by local investors. After leaving the Guardian he was contracted by the Tribune as online manager/editor and columnist. He has a degree in political science and journalism from the University of Miami.

The healthy state of industry and wealth is the state of absolute liberty, in which each interest is left to take care of itself. The only useful protection authority can afford them is that against fraud and violence. Taxes and restrictive measures never can be a benefit: they are at best a necessary evil; to suppose them useful to the subjects at large is to mistake the foundation of national prosperity...Jean-Baptiste Say … (next quote)
%d bloggers like this: