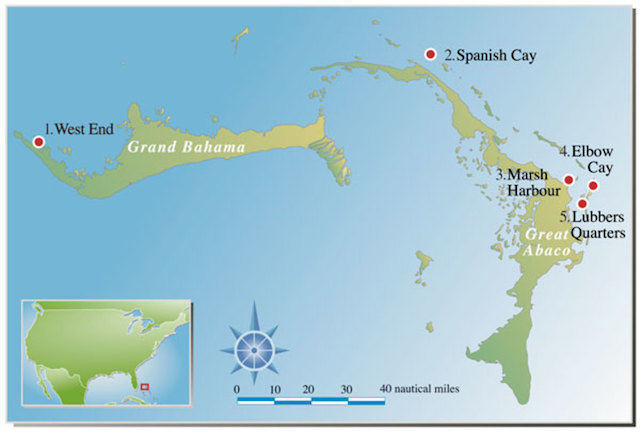 “The Island of Abaco is blessed with a good harbour, and is well secured by nature…(abounding) with timber.” 1783 loyalist advertisement circulated in New York.

MARSH HARBOUR, Abaco – Back in his early 20’s, a hardship post at a remote Bahamian logging camp seemed just as attractive to Dave Ralph as gauging streams for the US Geological Survey in Central Florida.

“I’d spend weeks by myself in the wilderness measuring water flow on the Suwanee and other rivers,” Ralph recalled. “Then one day in Ocala someone offered me a job in the Bahamas.”

The son of a New England preacher, Ralph jumped at the chance to move to a place he didn’t even know existed. And he has been there ever since – living in a steamboat cabin, a railroad car, a company shack, and finally his own little piece of paradise overlooking Marsh Harbour.

“In the pineyards of Grand Bahama and Abaco there was nowhere to go and nothing to do. But that suited me fine – I was a self-sufficient type who didn’t need a heavy social schedule,” Ralph said, his smiling face shaded by a trademark straw hat.

Now 70, Ralph arrived at the Pine Ridge logging camp on Grand Bahama in 1957. He bunked on a historic Hudson River steamboat, the Robert Fulton, that had been towed across the Gulf Stream to serve as a floating barracks. When the lumber concession was acquired by Owens-Illinois, the whole outfit moved to Abaco in 1959.

Ralph went along for the ride, and almost 40 years later he and his American schoolteacher wife, Kathy – whose dad was a missionary in the Bahamas in the 1930s – are still here. In fact, they founded Abaco’s first successful newspaper. Originally a labour of love, the Ralphs have since turned the Abaconian into a prosperous bi-monthly record of the community they call home.

Their career mirrors Abaco’s own growth. Today, the island’s bustling resorts are sought after by thousands of upscale tourists and second homers, but when the Ralphs arrived there were just a few thousand fishermen and pothole farmers living in isolated settlements with only the most basic amenities. Dave can tell you first-hand that the infrastructure laid down by Owens-Illinois had a dramatic impact on the island’s development.

“When we got to Abaco I had to live in one of four railroad cars the company had set up as a temporary advance camp on Snake Cay, about six miles southeast of Marsh Harbour,” Ralph recalled. “We worked a month on the rock, then got a weekend free in West Palm Beach. The lumber camp was all work, but they did keep us well fed.”

Abaco was covered by a dense pine barren – trees that had re-grown after the virgin forest had been logged by the Bahamas Timber Company in the early 20th century. Those loggers moved to Grand Bahama in 1944, where the concession was acquired by Wallace Groves, the American financier who later founded Freeport.

In 1955 Groves sold out to an American company called National Container Corp, which shipped the pine logs to its Jacksonville mill to make cardboard boxes. Meanwhile, Groves re-invested the $4million he got for the company into the development of Freeport, and Owens-Illinois moved the logging operation back to Abaco in 1959.

“Abaco was served by seaplanes from Nassau until the airport was built just outside of Marsh Harbour. Owens-Illinois also built the first arterial road linking coastal settlements, as well as hundreds of miles of logging roads deep into the forest that all led back to Snake Cay,” Ralph recalled. “I did the company payroll and Snake Cay was my home for years.”

The rusted hulks of the railroad cars that served as his bunkhouse in 1959 can still be seen at Snake Cay, half hidden by the undergrowth. But Ralph moved back into his old quarters on the Robert Fulton when it arrived at Abaco late that year, towed from Grand Bahama by the company’s tugs.

“The Fulton was a decrepit river boat and its decks sloped gently, saddle-style, bow to stern and centre to the edges,” he recalled. “In rough weather we would all get sea sick as it rocked back and forth, and would have to tie our swivel chairs to our desks or they would careen across the office as the ship rolled. It was also full of leaks”

Launched with much fanfare in 1909. the Fulton ferried passengers along the Hudson River between Albany and New York City for over 30 years. She was 415 feet long and could carry 6,000 people. But by the end of the Second World War, steamboats were obsolete and the old sidewheeler was consigned to the scrap yard.

She was brought out of retirement in 1950 and refitted at National Container Corp’s Jacksonville, Florida shipyard as a floating headquarters for the Bahamian logging operation. After engines, smokestacks and paddles were removed, the ship was converted into a self-contained town with its own clinic, general store, movie theatre, soda fountain, kitchen and bar.

Dave’s wife, Kathy, arrived at Snake Cay in 1960 to teach the children of the American supervisory staff, who would later be sent off to high schools in the States. She had the distinction of being the only single woman at the lumber camp at the time, and had originally come to the Bahamas as a schoolteacher for the Grand Bahama Port Authority.

“We both lived, worked and courted on the Robert Fulton,” Ralph says. “But after getting married in 1961 we moved into one of the pre-fabricated houses the company set up at Snake Cay. After the pulpwood operation closed in 1967 the old steamboat was cut up and junked in the pineyard.”

Pine forests cover about a quarter of the Bahamas – on the four northern islands of Grand Bahama, Abaco, Andros and New Providence. They have been heavily logged since the early 1900s – first for timber, then for pulpwood. Once considered environmental rape, scientists have since determined that the logging helped to maintain the pineyard’s unique ecosystem, which supports a variety of rare species, including the endangered Bahama parrot.

In fact, a 2004 report by The Nature Conservancy found that: “Except for the lack of age diversity, the pinelands on both Andros and Abaco are in good condition. Intensive logging every 50 years or so, with seed trees left, would continue to perpetuate the forest in a condition similar to what it is today. The pineland/coppice landscape on all four (northern) islands should be a conservation priority.”

Ten years ago the government set aside more than 20,000 acres in southeastern Abaco as a national park administered by the Bahamas National Trust . But Dave Ralph can recall when 50,000 acres in the central third of the island were converted into a huge sugar cane plantation in the 1960s.

“As the logging came to an end the company began looking for other ways to use the infrastructure it had built,” Ralph said. “This included hundreds of miles of roads, employee housing estates, storage facilities, machine shops, shipping channels and freight terminals.”

Owens-Illinois lobbied the US government for an import quota and set about turning the logged land adjacent to Snake Cay into sugar cane fields, forming Bahamas Agricultural Industries. At its peak it was the largest farming operation in the country, employing about a thousand people, including Haitians and Turks Islanders.

A workers town was built at Spring City that still exists today, surrounded by patches of cane field. The district commissioner’s headquarters moved from Hope Town to Marsh Harbour to allow easier access to government services for Owens-Illinois employees. And the heart of Abaco became a classic company town.

But it was short-lived. The first cane harvest in 1969 was converted to molasses and stored in huge holding tanks, which are still standing at the Snake Cay terminal. But the yield per acre was lower than anticipated, and after exporting 34,000 tons and losing $10 million Owens-Illinois closed up for good in 1970. Its remains were acquired by the government in 1979.

Meanwhile, the pulpwood operation had moved to Andros in 1967 and the Ralphs went with it to manage the company store in partnership with Floyd Lowe, a native of Green Turtle Cay. But Abaco was the island they really loved.

So in 1970 they invested their savings in the Lighthouse Marina at Hope Town and set about raising a family. A few years later they moved to Marsh Harbour to manage Boat Harbour and other properties, and eventually set up the Abaconian in 1993.

“Dave felt the area needed a newspaper to give businesses an advertising outlet, to let people know about events and meetings on the island, and to allow towns to know how other towns were dealing with problems,” Kathy said. “I was not at all enthusiastic, but it turned out well in the end. We both enjoy every facet of our work – it keeps us in close touch with the community.”

The Ralphs now distribute about 7,000 44- to 56-page newspapers twice a month throughout Abaco and the offshore cays – and there are hundreds of overseas subscribers as well. Their modest initial goals for the paper have long been achieved.

But the Abaconian was not the first newspaper to publish here. That honour goes to the Abaco Account – a monthly that was launched in 1963 by Maurice Thompson, the brother of Leonard Thomspon who developed the Treasure Cay and Abaco Beach Resorts. The Account folded after about a year when Maurice died.

An American named Harold Irr started the Treasure Times in the 1980s as a resort newsletter. It later morphed into the Abaco Journal, which still publishes occasionally. But the Abaconian is the only newspaper to have published continuously on Abaco for more than a decade.

Taking the breeze on the Ralphs’ verandah at Pelican Shores across from the bustling Marsh Harbour container port, the days of remote logging camps seem far away and long ago. Today’s Abaco must find a way to assimilate thousands of poor Haitian migrants and wealthy North American investors while retaining its Bahamian heritage and identity.

To sustain prosperity, the Abaconian must support development that takes account of environmental stewardship, strengthens community values, and builds political responsibility. This island, like much of the Bahamas, is at a crossroads. Creative thinking is required to avoid the pitfalls that lurk just over the horizon.

What do you think? E-mail your comments to: larry@tribunemedia.net

This article was first published in The Tribune on Wednesday, August 31, 2005.