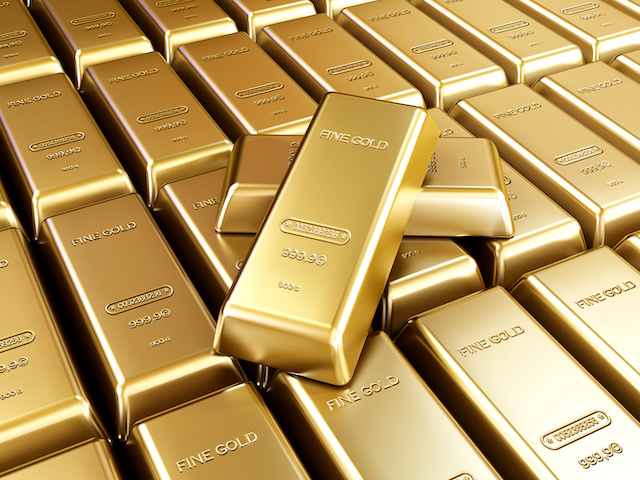 This price which is very close to the historic maximum reached in after-hours trading on 22 August 2011 tells us more about the dollar than about gold. Nothing has changed much in the nature and industry of the precious metal which has been a monetary metal for millennia. The dollar on the contrary has changed a lot since its definition. I will not dwell into the history of the dollar but concentrate in the last 75 years. After the Bretton Woods Agreement of 1944, the Federal Reserve fell into was later called the Triffin Dilemma. Robert Triffin a Belgian-American economist identified the dilemma of monetary authorities which issue currencies that are global reserves: if they are to fulfill the demand of other countries for the reserve currency, they will experience chronic trade deficits. Domestic policy objectives may enter into conflict with this international role. Fiscal and monetary restraint is required domestically to avoid exacerbating the trade deficit. Also, under the Bretton Woods Agreement, other central banks could ask the USA to convert US dollars to gold. The USA had accumulated the biggest reserves in the world during the first half of the Twentieth Century.

The Marshall Plan was the first signal that the USA was going to ignore the warnings. In the 60s with the Space Race, the Vietnam War and Johnson’s War on Poverty the fiscal situation deteriorated. As foreign central banks started to request the exchange of US dollars for gold the reserves came down from 12,500 tons to a little above 8,000. After a new request to convert from France, Richard Nixon on 15 August 1971 decided that the USA was to abandon the Bretton Woods Agreement and to let the US dollar float against all other major currencies. The USA intervened in the gold spot market for a while to prevent gold from appreciating but stopped after spending around 1,000 additional tons in the effort.

The Bretton Woods Agreement was the last obstacle. After that the USA government increased spending and started to issue debt at a greater rate. Private corporations and individuals also started to use more debt and at these late stages of the process debt is being used even to finance non-durable consumer goods. 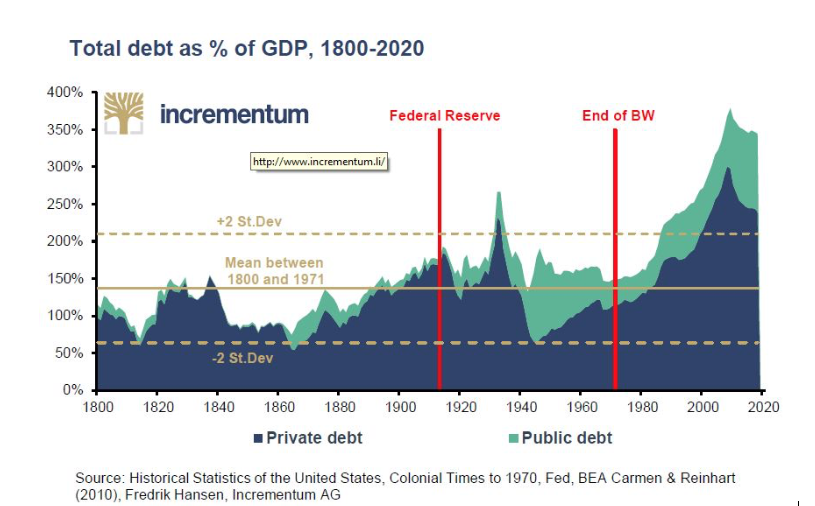 The effects of this credit expansion have been the depreciation of the dollar against real assets, the prevalence of the credit cycles and a reduction in the rate of growth of the economy. 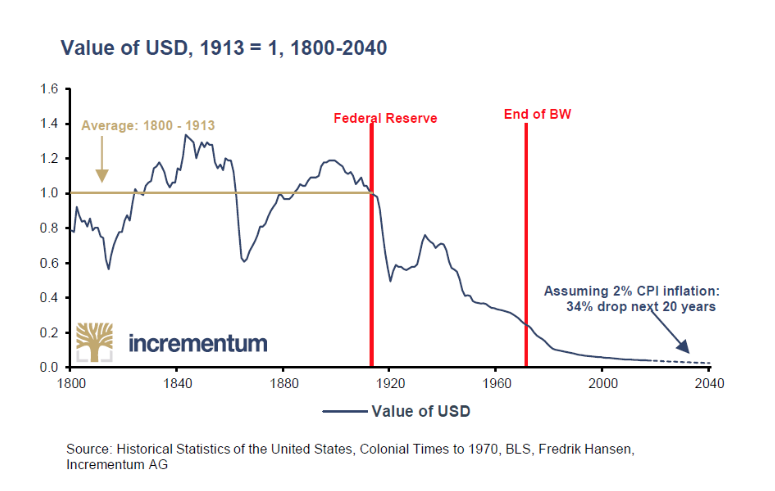 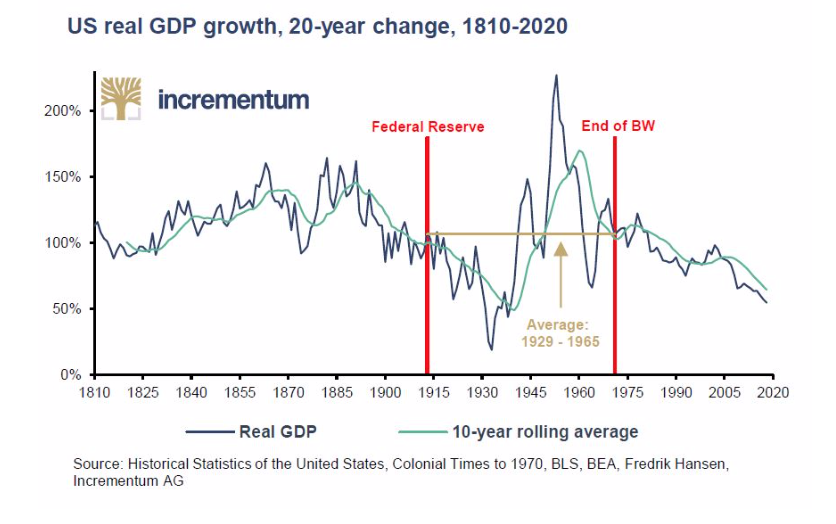 Again, the price of gold at an all-time high does not tell us anything about gold. It is a loud message about the US dollar which is in the final stages of the process that started in 1944 and was dramatically accelerated in 1971.

It is highly unlikely that similar policies to those implemented by Paul Volcker in the late 70s and early 80s will be implemented this time. The volume of debt is so much higher now that a deflationary recession will bankrupt not only many highly indebted companies, but also many banks, pension funds and insurance companies. The most likely path is one of inflation with financial repression with the objective of reducing the burden of debt at the expense of savers. In the long run a return to the pure gold standard with a reform of the banking industry along the lines of the Chicago Plan is the best way to return to a path of sustainable economic growth at rates consistent with growing incomes for the majority of mankind.

The graphics are from the 2020 In Gold We Trust Report by Incrementum AG of Liechtenstein (www.ingoldwetrust.report)