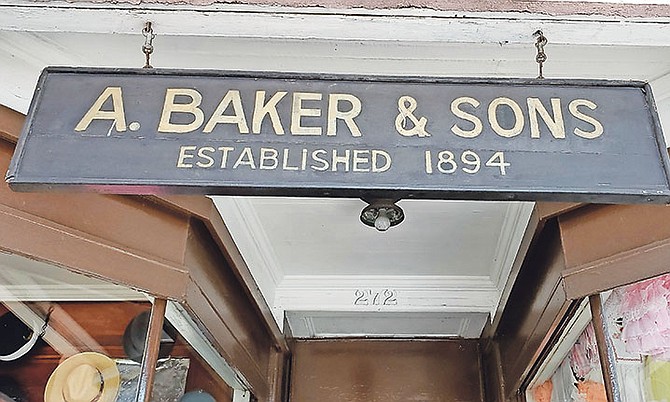 On a hectic downtown corner, where busses and tourists jostle for passage, there still operates a well-preserved relic of our past: A. Baker & Sons, Established 1894. This traditional haberdashery makes no concessions to the trendy fashions of today, but a savvy customer can find well-made shirts, pullovers, underwear, handkerchiefs, pyjamas, socks and ties stuffed in glass cabinets along the narrow corridor or lining the walls. The styles are yesterday’s, but so are the prices.   Straws and fedoras for men of an earlier generation are featured, plus one front window devoted to classics for pre-teen young ladies.

Other than hand-written sizes and prices, no publicity is on display, but a friendly bustling lady can find anything requested. It will be a cash-only purchase, which will be tucked away in a box from which change will be produced. There has been no need to up-date the commercial practices followed for many years by Elizabeth and Mary, the white-haired sisters who kept store into their eighties, daughters of the late George Baker.

He was known in his day as the country’s largest property owner, with holdings scattered throughout the islands. The store is tucked into the ground floor of the edifice owned by Mr. Baker looming over the intersection of Bay and Frederick Streets. It was once home of the long-closed Windsor Hotel, whose two stories of balconied terraces facing Bay provided the best view of the Junkanoo Parade while the bar and restaurant on the Frederick Street entrance welcomed New Year’s revelers.

Years ago Mr. Baker, in his nineties but still presiding in his Bakco Buiding office on East Shirley Street, told me he was “thinking about” developing the building for some profitable venture, but clearly he expired first.  Now, it seems that the venerable structure, still  looking solid as a rock, has been given a fresh coat of pink paint. Perhaps Mr. Baker’s descendants are at long last  considering  how to earn a return on their inherited asset. With downtown stimulation soon coming from the new Cruise Port, the economic anomaly of a huge centrally located vacancy  in the heart of our capital city cannot last forever.

Whatever happens, I hope I can still shop in A. Baker & Sons, a memorial to Olde Nassau.