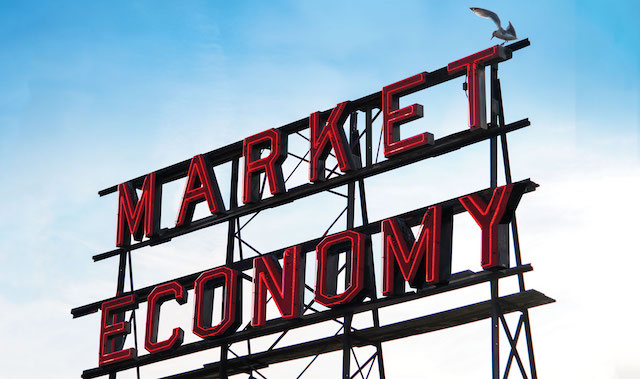 Published in The Freeman, October 25, 2012, and posted here with their kind permission. Read the original article here… The Freeman is a publication of The Foundation for Economic Education (FEE). Visit Dr. Boudreaux’s blog, Cafe Hayek, here…

Up until recently, one of the brightest lights in today’s blogosphere was EconLog’s Arnold Kling. (Alas, he recently decided to opt for the essay form.) He was one of the few bloggers whose every post I read and pondered carefully. When I found myself objecting to something that Arnold had written, I worried that my assumptions or knowledge or reason had failed me for the matter at hand.

First, the concept “market failure” is notoriously slippery. The absence, say, of more light-rail transportation in Little Rock might plausibly be seen by Jones as evidence of market failure but also might plausibly be seen by Smith as evidence of the prohibitively high cost of expanding such transportation in Little Rock. Social and economic reality being what it is, there are simply no tests available to settle this question with the sort of certainty that is often achieved by tests of physical matter.

Importantly, Jones’s assessment might be correct. Perhaps investors and entrepreneurs really are underestimating the demand for—or overestimating the costs of building and operating—more light-rail lines in Little Rock. Arnold wisely advises friends of free markets to recognize and to publicly concede that markets can and do fail, even though such failure might never be provable in the way that the earth’s elliptical rotation around the sun is provable.

To reject Arnold’s advice is inadvertently to strengthen the hand of those who insist that instances of market failure are sufficient justification for government intervention. It is (at least to appear) to concede that if and when markets should fail, government should intervene to correct the failure.

But in reality markets aren’t perfect. They’re just not. Markets do sometimes fail because of (bear with me as I parade before you a band of fancy economics terms) “asymmetric information,” “moral hazard,” “time inconsistency,” “free-rider problems,” “opportunism,” “strategic behavior,” “empty cores,” “lumpiness,” “transaction costs,” “bounded rationality,” and other features of reality that prevent markets from performing ideally.

These sources of market imperfections are themselves a second reason to take seriously Arnold’s advice to use markets even though markets sometimes fail. Too many people—including economists—remain stubbornly unaware that even the proven existence of a “market failure” is only a necessary condition to justify government intervention; market failure is not a sufficient condition.

Voters and government officials don’t become more godlike simply by acting in the domain of politics. So voters and government officials are at least as likely as are investors, consumers, and other private-market participants to be poorly informed, to let their emotions block their rational faculties, and to suffer each of the other decision-making quirks that can lead to market failure.

The answer is that market institutions are better than political institutions at minimizing the frequency, intensity, and ill consequences of uninformed, emotion-ridden, and otherwise fallible decision-making.

Relatedly, markets typically offer several competing products simultaneously—for example, Coca-Cola competes side by side against Pepsi, and shares in Apple are traded side by side with shares in Microsoft. Consumers and investors can reliably, if not perfectly, gauge the merits of each of these offerings relative to the merits of competing offerings. Not so with political candidates or public policies. Only one man will be president during the 48-month span from January 2013 through January 2017. If, say, Romney is sworn into office in January and three months later the unemployment rate falls dramatically, no one can be sure that this happy occurrence wouldn’t have occurred also—perhaps even more dramatically—if Obama had still been in office.

In our complex and dynamic society it’s a challenge under the best of circumstances to determine which of the consequences that follow on the heels of some action are caused by that action and which are merely coincidental. This challenge is even more difficult when an action has no competitors—that is, when no other similar actions are allowed to take place simultaneously with that action. With only one person in the Oval Office at any given time, the effects of that president’s economic policies are especially difficult to disentangle from the many other occurrences that are taking place in the economy. Perhaps the economy improved despite, rather than because of, that president’s policies.

Were it somehow possible for two (or more!) presidents to pursue their different policies under exactly the same conditions, the actual consequences of each policy would be more easily determined. The merits of one president’s policies relative to those of the other president’s would then stand out more clearly than they do in the real world where no two presidents’ economic policies can actually be compared simultaneously.

Yet another feature of government that causes its outcomes to be less desirable than those of the market is “lumpiness.” When Congress and the president agree on an annual appropriation for the U.S. military, every American is party to that specific annual appropriation. I—a dove—don’t get to have a lower appropriation than does my neighbor the war hawk. Government’s provision of national defense comes in a largely indivisible lump.

Not so in markets. If I prefer wine to beer, I get to have more wine than beer while my neighbor with opposite preferences gets to have more beer than wine. And all the while the teetotaling couple down the block chooses—and receives—a third, alcohol-free bundle of consumption goods.

Arnold Kling endorses free markets not because they are foolproof or flawless. They aren’t. Arnold supports them because the alternative is generally much worse: an especially flawed institution that fosters unusual amounts of foolishness.

Donald Boudreaux is a professor of economics at George Mason University, a former FEE president, and the author of Hypocrites and Half-Wits.