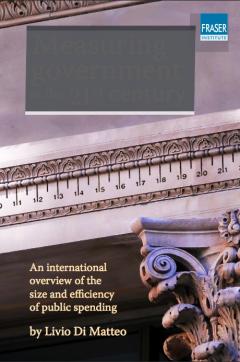 In Measuring Government in the 21st Century: An International Overview of the Size and Efficiency of Public Spending, Livio Di Matteo, Fraser Institute senior fellow and economics professor at Lakehead University, examines a wide range of international data to measure the size of government and how it affects economic growth and social outcomes such as crime rates, health and education levels.

“Government serves an important role in society, providing goods and services. But because taxpayers provide the revenue, they should get value for their money, and the public sector shouldn’t hamper economic growth,” Di Matteo said.

Economic growth, notes the book, is maximized when government spending accounts for approximately 26 per cent of GDP. In other words, governments that spend either below or above that range experience lower rates of economic growth. If Canada mirrored South Korea’s public sector model, for example, Canada’s public expenditure to GDP ratio would be 29 per cent, as opposed to the current estimate of 41 per cent.

“Most countries could have substantially smaller public sectors if they were as cost-effective as South Korea, without sacrificing services and economic prosperity,” Di Matteo said.

Di Matteo measured public sector efficiency based on a range of factors including inflation rates, unemployment rates, per capita GDP, disposable income and net wealth. Using these indicators, Di Matteo found that among the 34 member states of the Organisation for Economic Co-operation and Development (OECD), South Korea boasts the most efficient government while Turkey is the least efficient OECD nation. Canada ranks eighth. Despite regional cost differences and societal preferences, the evidence is clear.

“Government spending has generally grown both in terms of spending per person and as a share of the economy, but as government grows beyond a certain size it can actually begin to hinder economic growth, lowering living standards for average citizens,” Di Matteo said.