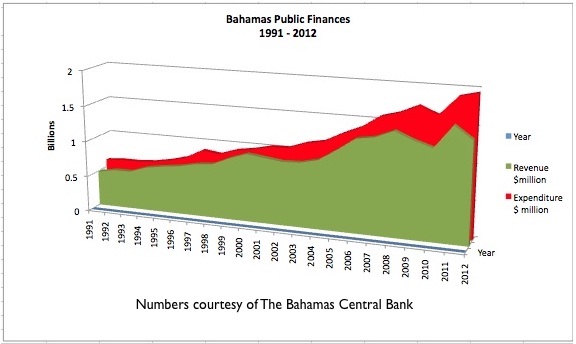 With Financial Secretary John Rolle confirming that the VAT rate will increase  “in the not too distant future”, it appears the implementation of VAT at 7.5% was only the thin end of the wedge so to speak. In other words, lull people to sleep thinking the additional tax is not as bad as it could have been and then keep ratcheting it upward.

Then we have former governor of the Central Bank of The Bahamas, finance minister and consultant to the Ministry of Finance, Mr. James Smith saying it’s “inevitable the Government’s size and spending needs would keep on increasing.“

Surely something is amiss? Is Mr. Smith suggesting the government cannot correct the path it’s on without excessive burdens of taxation?

With the tax burden resting heavily on so few businesses in the private sector, to pile more taxes on them, in the name of tax and fiscal policy reform, is to risk endangering their survival and sending more consumers to the Florida economy, exacerbating unemployment and government income. Then what?

It should be obvious by now that the route France has taken, as Veronique de Rugy points out in a recent article (The French Connection: Showing Why European Governments need a New Approach to Austerity – pdf), where “under both Presidents Nicolas Sarkozy and Francois Hollande “austerity” mostly took the form of spending increases and severe tax hikes”, is not the correct approach. This has done France little good so why should The Bahamas consider this route the only alternative?

de Rugy also advises that, “The “best buy” when it comes to debt reduction is structural reform combined with spending cuts and, if at all possible, tax cuts. Instead in Europe we have policies of tax increases and, often, government spending increases that neither supply siders nor Keynesians would recommend.”

A little spending restraint, not even cuts, would help. It remains unclear why the government of The Bahamas continues to believe that growing spending and increasing taxes, as they have proposed, is the only viable option.

Mr. Smith is correct that this is complex, but instead of not understanding, many people know the government just can’t keep doing what it has done for the past three decades or so and expect different results.

Yet, the sentiments of Messrs. Rolle and Smith seem to be that taxing and spending has got us this far, so why not continue the party!

As Friedrich von Hayek pointed out, “The curious task of economics is to demonstrate to men how little they really know about what they imagine they can design.” Maybe the complexities Mr. Smith alluded to are more than the country can handle? Particularly if the fiscal and tax policies in recent decades and those proposed in the recent Budget are considered.

Should the proposed tax and spending increases negatively impact our fragile economy even further, making it worse as anticipated, many of the elite folks designing the travesty will be retired, enjoying the fruits of their policies while more and more regular folks are left with a shrinking economic pie.

With debt to GDP approaching the danger level of 65%, does this mean Government is already too large, requiring more and more tax dollars to accomplish less and less?

The complexities of a burdensome state seems to be the difficulty?