Nassau, Bahamas—The Bahamas ranks 52 out of 165 countries and territories included in the Economic Freedom of the World: 2021 Annual Report, released today by The Nassau Institute in conjunction with Canada’s Fraser Institute.

Hong Kong and Singapore again top the index, continuing their streak as 1st and 2nd respectively. New Zealand, Switzerland, Georgia, the United States, Ireland, Lithuania, Australia and Denmark round out the top 10.

The report, based on 2019 data (the most recent comparable data), warns that recent events in Hong Kong will likely cause its score to fall as data become available for 2020 and 2021.

“Beijing’s intrusion on the rule of law, the foundation of economic freedom, will negatively affect economic freedom in Hong Kong,” said Fred McMahon, Dr. Michael A. Walker Research Chair in Economic Freedom with the Fraser Institute. “For the sake of the people of Hong Kong, we’ll continue to monitor the situation and report any decline in freedom.”

For example, countries in the top quartile of economic freedom had an average per-capita GDP of US$50,619 in 2019, compared to US$5,911 for bottom quartile countries. And poverty rates are lower. In the top quartile, 0.9 per cent of the population experienced extreme poverty (US$1.90 a day) compared to 34.1 per cent in the lowest quartile.

Finally, life expectancy is 81.1 years in the top quartile of countries compared to 65.9 years in the bottom quartile.

“Where people are free to pursue their own opportunities and make their own choices, they lead more prosperous, happier and healthier lives,” McMahon said.

The Fraser Institute produces the annual Economic Freedom of the World report in cooperation with the Economic Freedom Network, a group of independent research and educational institutes in nearly 100 countries and territories. It’s the world’s premier measurement of economic freedom, measuring and ranking countries in five areas—size of government, legal structure and security of property rights, access to sound money, freedom to trade internationally and regulation of credit, labour and business. 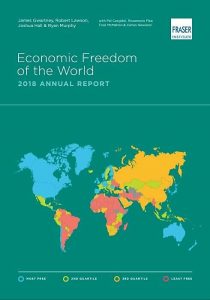 Economic Freedom of the World measures how policies and institutions of countries support economic freedom. This year’s publication ranks 165 countries and territories. The report also updates data in earlier reports where data has been revised.