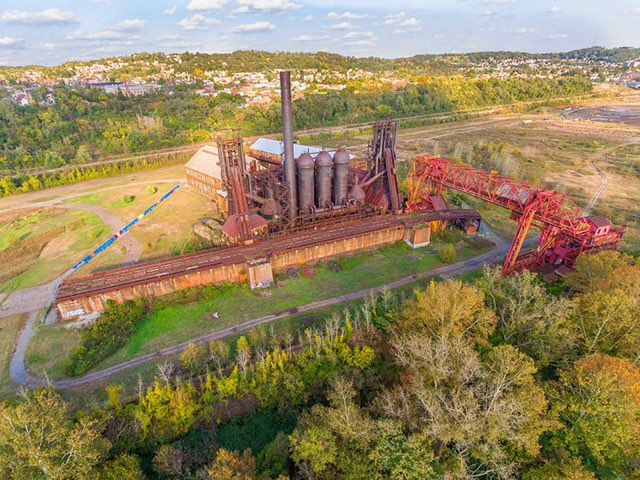 I recently did an interesting tour of the Carrie Furnaces, a national historic site of a former iron mill near Pittsburgh. Our guide who, despite very knowledgeable, had a dim view of the mill owners. He called them “cold-blooded, pragmatic capitalists” who ruthlessly cut costs without regard to workers’ safety and eventually closed down the mills when their technology became outdated and production of iron and steel became possible at much lower cost elsewhere (such as in Asia).

The guide lamented the fate of the over 200,000 iron and steel workers in the area who became “displaced”—lost their jobs—by the 1980s, as the mills closed and the industry moved elsewhere. He called them “victims” of capitalism. But were they?

It is unfortunate when workers lose their jobs when new labor-saving technologies are developed (such as the mini-mill technology and automation in the steel industry), or workers elsewhere are willing to do the work for lower pay. However, although job losses are painful to those who experience them, they don’t have to mean permanent unemployment.

But how long your unemployment will last, or whether you will lose your job at all, depends on the social system in which we live. If we had true capitalism, any large-scale job losses such as those about forty years ago in the Pittsburgh region, would not happen. And even if we had a freer social system than the current welfare-entitlement state (already firmly in place by the 1980s), unemployment would be short-lived. Why?

To answer that ‘why’ question, we must first understand what capitalism means. In Ayn Rand’s definition, capitalism “is a social system based on the recognition of individual rights, including property rights, in which all property is privately owned.” Under capitalism, individuals are free to pursue their own interests, as long as they don’t violate the rights of others (by initiating physical force or fraud). They can seek any work and trade with anyone who is willing. They can pursue any education or training and change jobs.

Capitalism has only beneficiaries and no victims.

But capitalism is a system of competition, where jobs have to be earned, based on merit, and are only available when someone sets up a business to produce and trade material values (goods and services) and wants to hire others to help. Under capitalism, there are no guaranteed jobs or wages—or guaranteed profits.  They must be earned by trading values: your productive work input for a job and a wage, and goods and services for a price that buyers are willing to pay and that exceeds the cost of producing them.

Capitalism is a system a system of competition where all traders must offer values. This pushes companies to innovate, to develop better and less expensive products and services, and processes for producing them. New technologies are developed, and old products—and jobs—are replaced by new ones. Whale oil lamps and oil lamp makers have been replaced by electricity (generated mostly from coal or hydro power) and electric light fixtures and by workers in electricity generation, distribution and in the light fixture industries.

The American steel industry and steel workers experienced similar competition in the 1970s, from countries such as South Korea and India. But the American steel workers didn’t need to be “victims.” Had the original, nearly capitalist American system of individual rights still existed, instead of the entitlement-welfare state, the steel workers would not have taken their jobs, their industry—or government welfare—for granted.

They would have considered themselves responsible for supporting their own lives and been on the lookout for the developments in their own industry and also for opportunities elsewhere. Many more would have moved on before the steel mills closed down, to Arkansas or Texas, or wherever there were jobs, or to different industries in their home towns if jobs were available.

Only the welfare-entitlement state has victims: people who have become to depend on the government for welfare checks or on unions to “protect” their jobs when no material values are produced and no profits are being made. When the welfare state hamstrings the producers and wealth creators, they reduce or stop production, causing jobs to disappear, and their capital flees elsewhere.

Capitalism has only beneficiaries and no victims. Freedom leads to competition and innovation. This creates opportunities for all who are willing to pursue them and to work (and affluence that ensues makes private charity possible, available to the miniscule minority unable to work). And individual rights are protected against coercion (and criminals are deterred and punished).