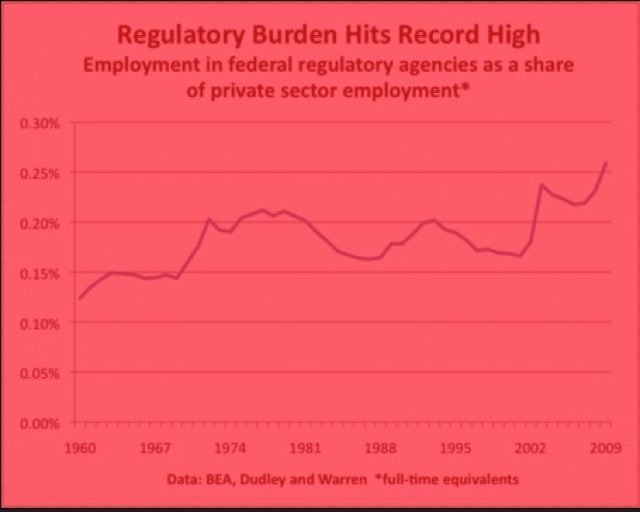 All tax payers are suffering under the increasing regulatory and tax burden, as governments are trying to cope with the sagging economies (that they themselves have created). Business is particularly under attack, as the major funder of governments’ spending schemes. Take Canada for an example, where the leftist Liberal government just delivered its second fiscal update: economic growth has declined and government revenue is down, despite significant ‘stimulus’ spending. In a futile effort to combat the malaise of the economy, the government has employed its trusted—and destructive—tools: increased spending and debt, and of course, increased taxes, such as the new carbon tax.

Despite all the historical evidence that has proven government ‘stimulus’ spending and debt accumulation hurting rather than helping economic growth and prosperity, the Canadian government has embraced the role of the steward of the economy (and the savior of the environment). While using all the weapons in its arsenal to chase away business investment—increased taxes, more environmental and other regulations, restrictions on foreign investment (due to economic nationalism), and restrictions on competition and development (think pipelines)—the government also claims to recognize that private investment is essential.

But instead of doing the right thing to improve the economic well-being of Canadians by liberalizing the economy and thus attracting private investment, the government has increased its intrusion through new initiatives. As Trevor Tombe reports in an informative Financial Post column, over $200 million has been allocated to a futile marketing effort, “Invest in Canada Hub,” to attract foreign investment. Also in the Financial Post, Lawrence Solomon reports a similar new initiative: a government-owned Canada Infrastructure Bank, for foreign investment in Canadian infrastructure.

All this makes the economic future of Canadians gloomy indeed. Can anything be done, given that the economic situation is similar in many parts of the world? As individual citizens, we can always try to influence political decision makers by letter writing, the social media, and talking to others to point out the freedom-curtailing and welfare-destroying actions of government, so that they can also try influence politicians, even in between elections.

However, businesses can have much more impact on the government policies than private citizens. The CEOs of major corporations in particular have the ear of the government. From what I hear, the Liberal government is eager to consult business leaders (although whether it would act on their advice when contradictory to government’s ideology, is uncertain). And even smaller businesses can have an impact through their industry or other associations.

The problem is, of course, that many business leaders either share, or pretend to share, the government’s ideology of ensuring equity through the welfare state and its CO2-slaying anti-fossil fuel ethos.

Or, if in a sheltered position, such as the telecom companies and airlines, they short-sightedly endorse the government restrictions on competition and requirements of Canadian ownership.

But by morally sanctioning and even advocating the tax-and-spend regulatory state—such as those oil industry leaders who apparently approached the government in Alberta, asking for carbon taxes and emission caps, in effect apologizing for the existence of their industry—businesses are paving the way for their own demise and destroying the prospect for more liberty and economic prosperity for all of us.

The only way to reverse the course of economic decline in Canada and elsewhere is to get the governments to liberalize the economies by doing all the things Tombe and Solomon suggest in their columns: cutting corporate taxes, lifting restrictions on development, increasing competition, and opening markets.

By clearly and publicly withdrawing their moral sanction of government’s freedom-curtailing and welfare-destroying actions, business leaders can have a big impact on all of our future. While speaking up is important, actions speak even louder. Moving investment and operations away from Canada (or within Canada) to jurisdictions where more economic freedom can still be found, such as in Asia (and Saskatchewan), will eventually get the message even to governments most committed to anti-freedom and anti-human ideology.

Economic freedom rests on political freedom: the protection of individual rights to life, liberty, property and pursuit of happiness. They are the underlying principle that businesspeople, the government, and the rest of us must embrace—if long-term success and flourishing is what we want.