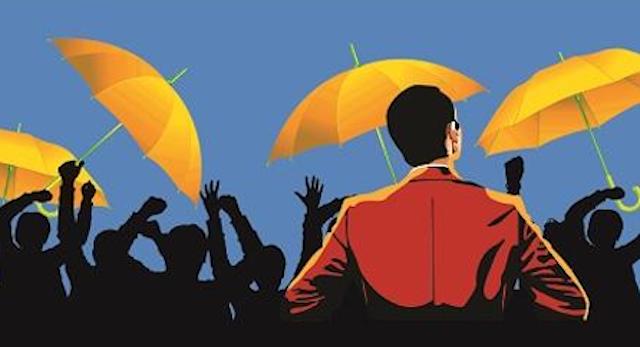 As during the Tiananmen protests, China is once again faced with a choice between repression and liberalisation

I was in Beijing in April 1989, lecturing at Peking University, when many of its students were encamped in Tiananmen Square demanding political liberalisation. Zhao Ziyang, the Chinese Communist Party’s General Secretary, whom I had met a few years previously, had come out to plead with the young demonstrators to go home, as he knew of Deng Tsiao Ping’s decision to declare martial law and order the army to clear the square. Fortunately, I had left China well before the massacre of early June. The rest is history.

In August 2014, attending a meeting of the Mont Pelerin Society in Hong Kong, staying in the Shangri La hotel in Kowloon, we directly looked across the bay to the square with the yellow umbrella protestors. At the meeting, Hong Kong’s chief executive denounced the demonstrators, emphasising that there had been no breach of the Sino-British joint agreement of 1997, which established the Hong Kong Special Administrative region as “one country, two systems” for 50 years from July 1, 1997. As Hong Kong had never been democratic as a British colony, the yellow umbrella protests demanding democracy soon petered out. The Sino-British agreement had also enshrined the British Common Law in Hong Kong to protect property rights and personal liberties.

The recent crisis was sparked by Hong Kong’s Chief Executive Carrie Lam, introducing an extradition Bill allowing both residents and visitors in Hong Kong to be sent to China for trial if deemed to be breaking the law. As Hugh Davies, the British ambassador who negotiated the Sino-British agreement has pointed out (in a letter in the Daily Telegraph, 14 June 2019) this undermines the Common Law liberties underwritten in the agreement which is “an international treaty between the two countries registered at the UN,” under which China cannot unilaterally exclude Britain from its joint obligations to Hong Kong as China is now asserting. With Britain currently embroiled in the Brexit mess, there has been a deafening silence so far from the UK. So, will China get away with its unilateral attempt to undermine the Common Law protections in Hong Kong?

It appears that Carrie Lam acted unilaterally to curry favour with Beijing. But her actions have backfired, much to Beijing’s fury with the mass demonstrations it has provoked, and Lam has been forced to suspend the Bill for the time being. Moreover, the erosion of civil liberties in Hong Kong has led the US to threaten to strip it of its special status under the US Hong Kong Policy Act of 1992, which recognises the territory as an independent member of the WTO. The bipartisan Hong Kong Rights and Democracy Act recently introduced in the US Congress “cocks the trigger on what amounts to a sanctions regime covering trade, finance and technology”, turning Hong Kong into just another Chinese city, and part of the current US-China trade wars. (Ambrose Evan-Pritchard, “US may strip Hong Kong’s Special Status”, Daily Telegraph, June 2019). The exodus of the wealthy and foreign companies to Singapore has already begun, and if the extradition Bill is implemented it could be the end of Hong Kong as the major East Asian financial hub.

Along with these current dangers from the crisis, there is the incipient danger for President Xi from appeasing the young protesters. These are illuminated in the recent revelations of the “New Tiananmen Papers” (see Andrew J. Nathan, www.foreignaffairs. com) which provide the party’s response to the 1989 crisis. A post-Tiananmen special meeting of party leaders and elders analysed the causes of the disturbance, revealing a profound paranoia about domestic and fictional foreign enemies. A telling comment relevant to the current Hong Kong crisis was by Song Renqiong, the vice chair of the Central Advisory Commission who said “ forty years ago [US Secretary of State John Foster Dulles] said that the hope for the restoration [of capitalism] in China rested on the third or fourth [post-communist] generation. Now, the state of political ideology among a portion of the youth is worrisome. We must not let Dulles’ prediction come true.” This does not augur well for the young yellow umbrellas.

Furthermore, the old argument of the economic importance of Hong Kong to China’s economic prosperity has also diminished over time, as from providing about 20 per cent of China’s GDP in 1997, it now accounts for just 3 per cent. But for the princelings in mainland China and many foreign companies, the proposed extradition Bill threatens not only their property rights but also their personal safety. The movement of companies and the mainland elite resident in Hong Kong to Singapore, which began after the 2014 umbrella demonstrations, has grown. (see “Beijing grip alarms mainland elite in Hong Kong” FT, 21 June 2019). But, given his assault on many of the princelings in his anti-corruption campaign, this exodus is unlikely to give President Xi many sleepless nights. He is more likely to be concerned about the effects on the populace of the continuing economic slowdown and crippling pollution.

It is in this context that the fateful decision that Deng took in May/June 1989 to turn the guns on the Tiananmen protestors should be seen. As Andrew J, Nathan has argued (in “China’s Original Sin”, www.foreignaffairs.com) in April 1989, Deng faced the choice of liberalisation or repression. Zhao Ziyang argued for dialogue with the students who “were patriotic and shared the regime’s goal of opposing corruption”, and would leave peacefully if the regime accepted their demands. Li Peng, the Prime Minister argued that if the Chinese Communist Party “legitimised opposition voices by negotiating with them, the party’s political rule, based on a monopoly of power would crumble”. Deng sided with Li. The government has ever since had to tighten repression, whilst enforcing a silence on Tiananmen to eliminate its memory. This growing repression has created a surveillance state and a million Uighur Muslims interned in the new Gulag in Sinkiang. It has also created the authoritarian crony capitalist model of growth. But, above all, argues Nathan, Deng’s fateful decision leading to a state dependent on repression, also shows the fragility of repression, as demonstrated by its viewing the granting of the Nobel Peace Prize to Liu Xiaobo as an existential threat to it. By silencing any memory of Tiananmen “it is trying to outrun history, but history cannot be outrun. It can only be confronted”. As the old men discussing China’s future in the new Tiananmen Papers feared, history is on the side of the youth marching through Hong Kong, and that is the conundrum President Xi now faces.

Nothing is so powerful as an idea whose time has come.Victor Hugo … (next quote)
%d bloggers like this: