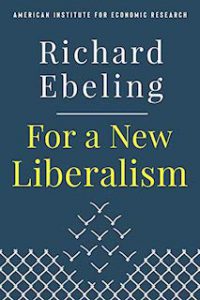 In “For A New Liberalism,” Richard M. Ebeling explains that the liberal believes that the freeing of all the minds of society will produce the creative innovations in the marketplace of supply and demand.

Over time, these innovations improve the qualities and standards of living of all, and far better than when confined within the restrictions of government regulations and controls over how best men should apply their talents and on the terms they consider most attractive, all things considered.

Richard M. Ebeling, an AIER Senior Fellow, is the BB&T Distinguished Professor of Ethics and Free Enterprise Leadership at The Citadel, in Charleston, South Carolina. Ebeling lived on AIER’s campus from 2008 to 2009.

The American Institute for Economic Research in Great Barrington, Massachusetts, was founded in 1933 as the first independent voice for sound economics in the United States. Today it publishes ongoing research, hosts educational programs, publishes books, sponsors interns and scholars, and is home to the world-renowned Bastiat Society and the highly respected Sound Money Project. The American Institute for Economic Research is a 501c3 public charity.