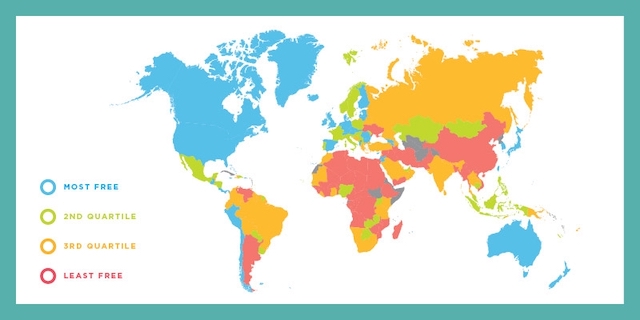 Nassau, Bahamas—The Bahamas ranks 39 out of 162 countries and territories included in the Economic Freedom of the World: 2020 Annual Report, released today by The Nasssau Institute in conjunction with Canada’s Fraser Institute.

Hong Kong and Singapore again top the index, continuing their streak as 1st and 2nd respectively. New Zealand, Switzerland, the United States, Australia, Mauritius, Georgia, Canada and Ireland round out the top 10.

The report, based on 2018 data (the most recent comparable data), warns that recent events in Hong Kong will likely cause its score to fall as data become available for 2019 and 2020.

“Intrusion on the rule of law, the foundation of economic freedom, by the Chinese Communist Party is negatively affecting economic freedom in Hong Kong,” said Fred McMahon, Dr. Michael A. Walker Research Chair in Economic Freedom with the Fraser Institute.

“Where people are free to pursue their own opportunities and make their own choices, they lead more prosperous, happier and healthier lives,” McMahon said.

The Fraser Institute produces the annual Economic Freedom of the World report in cooperation with the Economic Freedom Network, a group of independent research and educational institutes in nearly 100 countries and territories. It’s the world’s premier measurement of economic freedom, measuring and ranking countries in five areas—size of government, legal structure and security of property rights, access to sound money, freedom to trade internationally and regulation of credit, labour and business.

The Bahamas has made progress over 2017’s data and we hope this trend continues.

Here’s how The Bahamas compares to regional competitors Jamaica and Barbados. 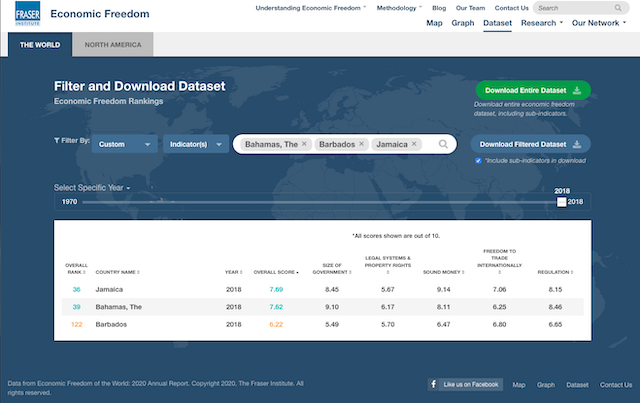 Economic Freedom of the World measures how policies and institutions of countries support economic freedom. This year’s publication ranks 162 countries and territories. The report also updates data in earlier reports where data has been revised.

Founded in 1995 The Nassau Institute is a research institute – a think tank- that promotes capitalism and free markets. Our mission is to formulate and promote public policies for The Bahamas based on the principles of limited government, individual freedom, and the rule of law. www.nassauinstitute.org

Political freedom means the absence of coercion of a man by his fellow men. The fundamental threat to freedom is power to coerce, be it in the hands of a monarch, a dictator, an oligarchy, or a momentary majority. The preservation of freedom requires the elimination of such concentration of power to the fullest possible extent and the dispersal and distribution of whatever power cannot be eliminated — a system of checks and balances.Milton Friedman … (next quote)
%d bloggers like this: