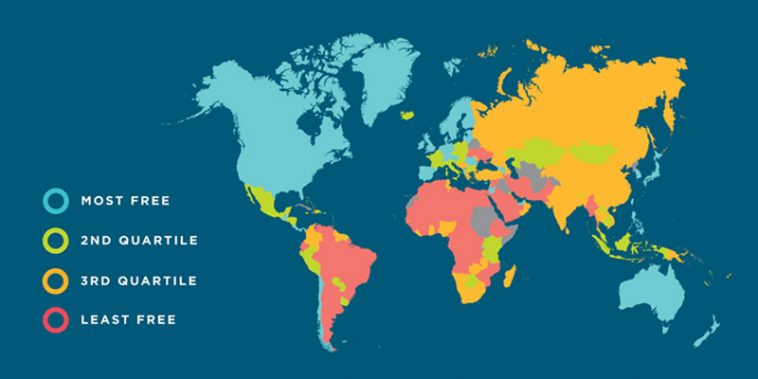 Nassau, Bahamas—The Bahamas ranks 54th out of 159 countries and territories included in the Economic Freedom of the World: 2017 Annual Report, released today by The Nassau Institute in conjunction with Canada’s Fraser Institute.

Hong Kong and Singapore again top the index, continuing their streak as 1st and 2nd respectively. New Zealand, Switzerland, Ireland, the United Kingdom, Mauritius, Georgia, Australia and Estonia round out the top 10.

It’s based on data from 2015 (the most recent year of available comparable data) and measures the economic freedom (levels of personal choice, ability to enter markets, security of privately owned property, rule of law, etc.) by analysing the policies and institutions of 159 countries and territories.

This year, for the first time, the ranking is adjusted for gender equality. In countries where women are not legally accorded the same level of economic freedom as men, that country receives a lower score.

“The link between economic freedom for all citizens and the prosperity they enjoy is undeniable, while the lowest-ranked countries are usually burdened by oppressive regimes that limit freedom and opportunity,” McMahon said.

The 10 lowest-ranked countries are: Iran, Chad, Myanmar, Syria, Libya, Argentina, Algeria, the Republic of the Congo, the Central African Republic and Venezuela. Some despotic countries such as North Korea and Cuba can’t be ranked due to lack of data.

For example, countries in the top quartile of economic freedom had an average per-capita GDP of US$42,463 in 2015 compared to US$6,036 for bottom quartile nations.

Moreover, the average income in 2015 of the poorest 10 per cent in the most economically free countries (US$11,998) was almost twice the overall average per capita income in the least free countries. And life expectancy is 80.7 years in the top quartile of countries compared to 64.4 years in the bottom quartile.

The Fraser Institute produces the annual Economic Freedom of the World report in cooperation with the Economic Freedom Network, a group of independent research and educational institutes in nearly 100 nations and territories. It’s the world’s premier measurement of economic freedom, measuring and ranking countries in five areas: size of government, legal structure and security of property rights, access to sound money, freedom to trade internationally, and regulation of credit, labour and business.

Economic Freedom of the World measures the degree to which the policies and institutions of countries support economic freedom. This year’s publication ranks 159 countries and territories. The report also updates data in earlier reports in instances where data has been revised.