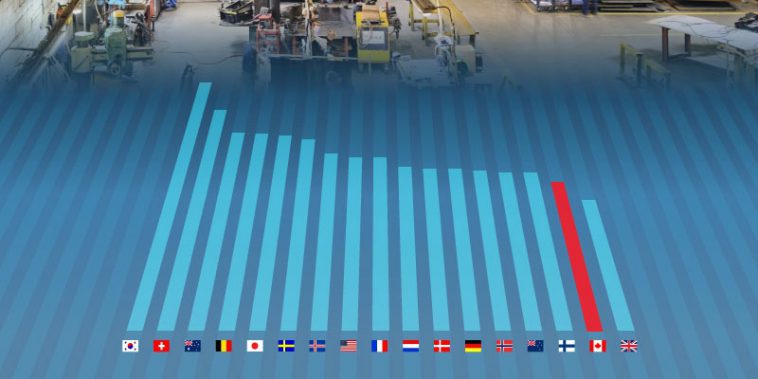 OTTAWA—Canada lags far behind other developed countries when it comes to business investment, which is critical to grow the economy and increase living standards, finds a new study released today by the Fraser Institute, an independent, non-partisan Canadian public policy think-tank.

“When businesses invest in the latest technologies and production techniques and expand their operations, it spurs economic growth and raises living standards for workers,” said Philip Cross, former chief economic analyst for Statistics Canada and author of Business Investment in Canada Falls Far Behind Other Industrialized Countries.

The study finds that Canada has suffered persistently weak levels of business investment—money firms spend on buildings, machinery and equipment, research and development—since at least 2000.

“With low levels of business investment compared to other developed countries, Canadian workers do not have access to the tools and technology they need to be more productive and earn higher incomes,” Cross said.

“The factors affecting business investment are complex, but governments across Canada have aggravated the problem in recent years with an onslaught of economically damaging policies such as higher taxes, costly regulations and increased uncertainty about future taxes by adding billions in debt.”

About The Fraser Institute

Their mission is to improve the quality of life for Canadians, their families, and future generations by studying, measuring, and broadly communicating the effects of government policies, entrepreneurship, and choice on their well-being.

Headquartered in Vancouver, Canada, the Fraser Institute has regional offices in Calgary, Toronto and Montreal. We produce research about government actions in areas that deeply affect Canadians’ quality of life such as taxation, health care, aboriginal issues, education, economic freedom, energy, natural resources and the environment.