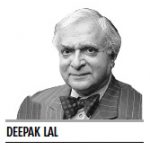 In 1990, the American Academy of Arts and Science (AAAS) asked me to write a paper on the economic impact of Hindu fundamentalism for its massive Fundamentalism project. Not having any contacts in the Bharatiya Janata Party (BJP), when I arrived in New Delhi I contacted my old friend Vinod Pandey who was the cabinet secretary. He put me in touch with L K Advani and Subramanian Swamy who provided me with contacts and literature to conduct my research. He also put me in touch with VP Singh who was heading a minority Janata Dal government with outside support from the BJP and the Left.

The first thing Advani said to me was that with no central church or central dogma there were no religious fundamentals which could be used to identify or organise a Hindu fundamentalist movement. Hinduism was a way of life, and hence the BJP in line with various Hindu revivalist movements was promoting Hindu cultural nationalism in the face of alien rule by Muslims and the British since 1000 AD. Hence, my paper was titled, The Economic Impact of Hindu Revivalism (in Martin E Marty and R Scott Appelby (eds) Fundamentalism and the State Chicago, 1993). I had commended Subramanian Swamy’s paper, Agenda for National Revival, which argued for a market economy. But Mr Advani stated that there were still no votes for it. As Congress and the Janata party had taken up the cause of the “have- nots” the only recourse for the BJP, after its disastrous defeat in the 1984 elections was to play the card of Hindu revivalism. Thence the programme for the Ram Mandir.

Meanwhile, to shore up his fragile government, V P Singh had implemented the Mandal report. When I admonished him — over drinks with Vinod Pandey — that this was mad, he replied that “I am mad”. As many commentators including M N Srinivas (Village, Caste, Gender and Method, OUP 1996) pointed out, the resulting expansion of reservations would balkanise the country and lead to the emigration of its best and brightest. As my fellow BS columnist Shekhar Gupta has noted in his last column, the BJP, which has always been against caste-based reservations, as they divide the “Hindu rashtra”, has in this last election succeeded in destroying the caste-based vote banks flowing from Mandal by defeating the mahagathbandhans in UP and Bihar. This is the great achievement of Modi’s victory.

This also highlights how political entrepreneurs in a democracy can alter the dynamics to emasculate dysfunctional policies. Modi and Shah recognised the importance of the new young neo-middle class of Other Backward Classes’ migrating from the villages. They, as Minna Saavala has shown (in Middle Class Moralities Orient Blackswan, 2012), are an aspiring class whose caste identity has been eroded. They want growth for a brighter economic future. They are intensely religious adhering to Hindu rituals in a form of Sanskritisation. Like their upper caste compatriots, they want a meritocracy and are against reservations. They are attracted by Modi’s slogan of “development not doles”. They are part of the Gandhian wing of Macaulay’s children (identified in my column, Macaulay’s Children (September 2007), for whom, unlike the other Nehruvian wing, English is an instrumental second language. As I have argued in my Ohlin lectures, Unintended Consequences, (MIT,2001) cosmological beliefs about how one should live are determined by mother tongues, which for the neo-middle class are their native languages endorsing tradition. So the cosmological beliefs of the English speaking Westernised middle classes carry little weight with them, including various forms of noblesse oblige disguised as egalitarianism as in Congress’ NYAY proposal. Instead, the BJP’s adoption of the social programmes of the South Indian pioneers Karunanidhi and Jayalalitha of providing direct benefits in kind— toilets, gas cylinders, electricity, bank accounts etc — have resonance.

Many commentators and political scientists are claiming (see Christophe Jaffrelot et. al. Majoritarian State, Harper Collins, 2019) that Modi’s victory will destroy democracy and create a populist majoritarian authoritarian regime under Modi as a “neo-sultan”. This is maladroit. As I argued in my column, On Populism (11 Nov. 2016), following S E Finer’s magisterial study The History of Government, the Enlightenment principle of popular sovereignty legitimising political authority led to two forms of polity. The first based on an English foundation was provided by the US Constitution, creating a representative but not a direct democracy, with various checks and balances embodying the classical liberal principle of limited government. The other was an authoritarian form of direct democracy advocated by Rousseau and adopted by many continental countries, which led to populist totalitarian democracies under Napoleon, Hitler and Mussolini. India has adopted the representative Anglo-American version which unlike many other developing countries has survived for over 70 years.

This as I have argued in my The Hindu Equilibrium (OUP, 2005) is due to ancient political habits set in the vast fertile Indo-Gangetic plain protected by the Himalayas which led to endemic political instability, and the need to tie scarce labour to land for its labour intensive plough agriculture. This was done by its unique social system of caste, which by making war the trade of professionals, saved the mass of the population from being inducted into the deadly disputes of its changing rulers, while the tradition of paying a certain customary share of the village output as revenue to the current overlord meant that any victor had little incentive to disturb the daily business of its newly acquired subjects. The democratic practices gradually introduced by the British have fit these ancient political habits like a glove. The ballot box has replaced the battlefield for the hurly-burly of continuing political conflict, while the populace accepts with a weary resignation that its rulers will, through various forms of rent-seeking, take a certain share of output to feather their own nest.

Furthermore, since the establishment of the numerous feuding monarchies in the Indo-Gangetic plain, the lodestone of every petty chieftain has been the establishment of a pan-north Indian or subcontinental empire. This chakravartin tradition continues in democratic India, first under the Congress hegemony of Nehru and Indira Gandhi, and is now emergent under the BJP after Modi’s historic election victory. This is not “neo-sultanism” but a part of ancient Indian political habits, which have also made liberal democracy the habitual political form in contemporary India.