Presentation at The College of The Bahamas, Performing Arts Centre, Thursday, October 13, 2011, 7:00pm.

First of all I would like to congratulate Dr. Strachan and the other organisers for your initiative to have a frank discussion on tax policy. I’m not sure this has happened before.

Second, thanks are in order for inviting The Nassau Institute to have a seat at the table to offer our perspective. Albeit you’re saddled with a presentation by me.

Third. I must declare at the outset that I’m not a tax expert and come at this from the perspective of a businessman with a serious interest in economics and public policy.

Fourth, I am concerned with discussions about tax policy that we will get into the class warfare fights like the US finds itself in now. That is so self defeating in my view.

Abraham Lincoln reminded America about the importance of the rich.  I know I am grateful for the risk takers that become successful by providing goods and/or services other people want. That’s how many of us have jobs today.

Lincoln put it this way.

“You cannot help the poor by destroying the rich. You cannot strengthen the weak by weakening the strong. You cannot bring about prosperity by discouraging thrift. You cannot lift the wage earner up by pulling the wage payer down. You cannot further the brotherhood of man by inciting class hatred. You cannot build character and courage by taking away people’s initiative and independence. You cannot help people permanently by doing for them, what they could and should do for themselves.” –Abraham Lincoln

Enough with the disclaimers.

In summary, I will attempt to make four points:

One of my favourite US presidents once said, “The government’s view of the economy could be summed up in a few short phrases:  If it moves, tax it.  If it keeps moving, regulate it.  And if it stops moving, subsidize it.” (Ronald Reagan)

And most public utterances about this subject from the political class here at home suggests that the government needs more tax dollars in order get its fiscal house in order. Seldom if ever do they mention less spending.

Is Government Spending the Problem?

Well let’s take a look at some of the numbers from 2003 to 2008.  These numbers are courtesy of The Central Bank of The Bahamas: 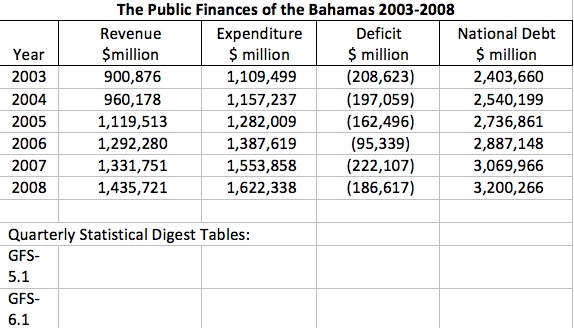 Regretfully, The Bahamas national debt is now over $4.3 Billion!

Here are more numbers courtesy of the Central Bank of The Bahamas.

In a nutshell, government spending is obviously the issue, not income.

Even if we allow for the fact that the archipelagic nature of The Bahamas puts it at a distinct disadvantage when compared to single-island states like say Barbados, (20 airports. 20 Ports. Schools on every island etc) spending is still the problem.

According to the KPMG Barbados review of the 2011 Budget there, government spending has outpaced revenue consistently, and not by marginal amounts.  See: http://bit.ly/mUp5Vs (pdf) 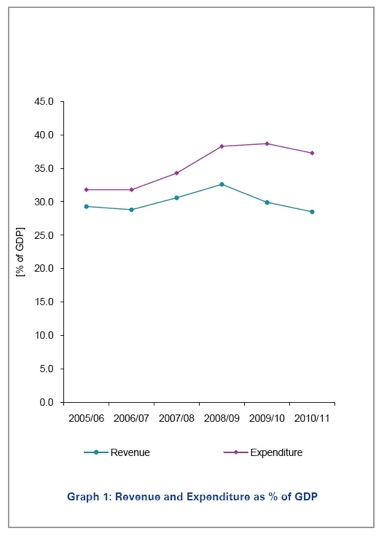 It appears to me that Barbados has a spending problem worse than ours.

You often hear the argument, that import taxes are a regressive system, where the poor pay more in taxes as a percentage of income than the middle class or rich do and they are protectionist.

I would argue that the poor spend most of their money on food, and the prices for most staple items are controlled by legislation. And the middle and upper classes have more disposable income to spend on luxury items, and hence bear more of the tax load.

While I agree that import taxes can be used as a protectionist tool, that is not the case in The Bahamas as we have a very limited manufacturing segment.

One advantage to import taxes, or what we call excise taxes today, is that it is difficult for the Government to increase them any more without Bahamian taxpayers noticing the increasing burden.

A case in point is the import tax on a full size pick up. The list price for a Chevrolet Silverado is $39,263 and this includes $13,740 in import (excise) taxes. It’s difficult to raise this any further without raising the ire of the consumer. The Import/Excise Tax is 85% of the CIF value or 35% of the retail price.

I rather like this aspect of our present tax structure because of the inherent controls on governments over zealousness with taxing and spending. I would argue we’ve reached the limit already, so the cry is for more revenue.

If we must change our system, what do we change it to?

This is a road I am hesitant, no loathe, to walk. I would prefer to make recommendations on reducing the size of the government, thereby reducing the need for taxation, rather than helping promote governments ability to dip into taxpayer pockets even more.

But alas, that’s not the topic.

While I am inclined to leave the system the way it is, or move to a very simple sales tax, Dr. Alvin Rabushka, a tax expert, and Flat Tax advocate, visited The Bahamas in the 1990’s and recommended a VAT.

For the purposes of this discussion, I would like to lean heavily on his recommendations from a speech he made to The Rotary Club of Nassau, May 13, 1997, that’s going on 15 years ago, if you would permit me to paraphrase him:

Dr. Rabushka is best known for his advocacy of a flat-rate income tax in the United States, but was not eager to recommend an income tax for The Bahamas because we derive considerable benefit from our “tax haven” status and it is not clear how Bahamians and the offshore sector would regard an income tax.

He suggested expanding the payroll tax, as has been the experience in Bermuda, which is the most ready source of higher revenue. However, he noted a big caveat. The revenues obtained from any new or higher payroll taxes must take the form of general revenue, rather than serve as a vehicle to buy more government debt as is now the case with the National Insurance Board.

Parliament would have to enact a law which stipulates that any new revenue from higher payroll taxes be offset by a corresponding reduction in import or other taxes.

Parliament should also enact a balanced-budget law, which stipulates that the proceeds of revenue from additional payroll tax receipts, over and above the current rate, could not be used to buy new government debt.

Second, to go a little further, he suggested exploring the imposition of a uniform value added tax, or VAT, as a comprehensive substitute for import taxes.

He noted that VAT is a tried-and-proven system of revenue collection. If imposed on the economy’s full range of goods and services, the rate can be kept low and the retail price of many goods in The Bahamas will fall, thereby expanding retail trade, with its associated employment.

He reminds us that high rates in turn encourage smuggling and evasion.

Many countries with incomes and literacy standards well below that in The Bahamas have successfully installed VAT systems.

It would take time, at least three years, to install a VAT. But sooner or later the creaky customs regime will require a complete overhaul.

Third, the government should price all services, where possible, on a commercial basis. The public corporations should be privatized as quickly as possible, with the proceeds of privatization directed solely to reduce public debt, and the government’s fee structure should be annually reviewed and updated.

Fourth, and perhaps first on any list, the government must consult widely with the public as it considers tax revision and tax reform options. The support of all sectors of the Bahamian people is necessary for the success of any serious change in the current tax system.

Finally, he told us; do nothing and allow the current tax system to linger indefinitely is to ask for fiscal trouble in the years ahead. Sound public finances are an essential ingredient in any economic environment. The Bahamas needs to get its fiscal house in order, and addressing the problems of the current tax system is part of that effort.

See: Recommendations for Tax Reform in The Bahamas by Dr. Rabushka here… http://bit.ly/bspzJI

We must limit the tax rates & the size of Government

To paraphrase Benjamin Franklin, nothing in this world is certain but death, growth of government and by extension, taxes.

Dr. Dan Mitchell ( see http://bit.ly/pe7vFO ) points out why when he notes that there are some 72,000 pages of law and regulation that form the US Tax Code, and if we allow a tax change without limiting the size and scope of government, we will no doubt end up in the same position. It might not be in our lifetime, but I bet today’s world leaders did not anticipate leading nations that are in effect bankrupt. 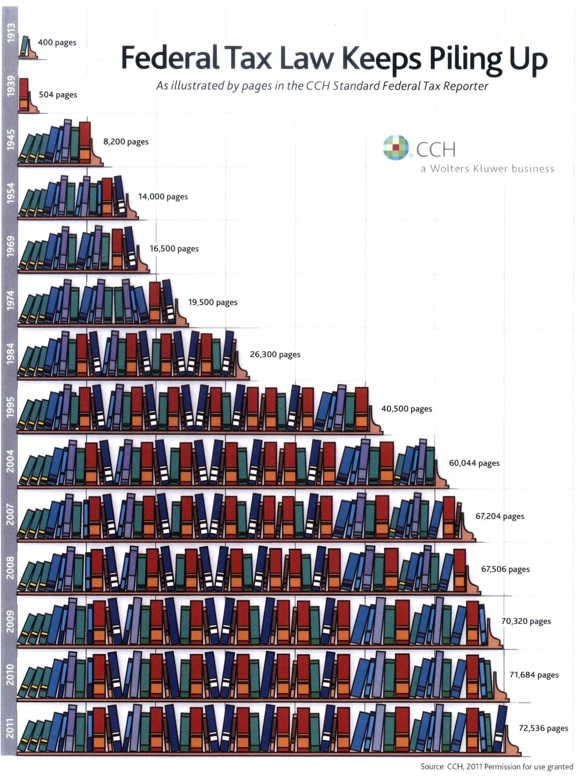 Our government has increased in size and spending exponentially since The Bahamas was granted independence in 1973, and then borrowed what it over spent and the country is now in debt as a result to the tune of over $4 billion.

The debt levels have increased to such an extent that I am truly concerned that future generations will not enjoy the standard of living many of us in this room have come to enjoy.

It’s not all doom and gloom however. If the government would stop nibbling away at free enterprise, as George Will coined it, (see http://wapo.st/qBfsy0 ) with it’s continual avalanche of taxes, laws and other regulations, we might begin to see a rebound in investment by businesses and entrepreneurs. The public treasury will then benefit from higher revenue as a result.

Obviously this is not a simple matter and will take tremendous political will to implement a new tax system.  But something must give, and I prefer to see government spending and borrowing controlled before the country ventures down the slippery slope of changing the tax system.

It does not matter if we retain the current system or implement any of those recommended here tonight, we must ensure controls on the governments ability to tax, spend and borrow with reckless abandon, (as successive governments have been wont to do since Independence) are in place before any change is attempted.

I must repeat that there has to be guarantees in place that the tax system will kept as simple as possible with minimal regulations so the economy is not stifled any more than it is today.

Having said all that, if a country like Sweden, often referred to as a great example of how “Progressivism” works, can slowly reduce income taxes because of the negative impact on economic growth and worker productivity (they’ve also introduced other market reforms like vouchers for education and choice in health care), we should stick with the current tax system to get the political class to make the tough decisions necessary to get our fiscal house in order. And I certainly do not support an income tax not only because of the reasons here, but because of it’s potential to kill investment possibilities that help grow the economy.

Thank you for your indulgence.

The Flat Tax by Alvin Rabushka and Robert Hall http://bit.ly/qEcZ7Q