It was recently suggested that The Bahamas should double its expenditure on education as if that would be a pancea.

A little research is necessary.

While there are many variables of what governments around the world classify as spending on education, or class sizes etc, it is worth comparing The Bahamas expenditure with a few other countries to gain a little perspective. When compared to the USA, Sweden, Canada, China and Japan, The Bahamas ranks second in expenditure on Education. See chart below. 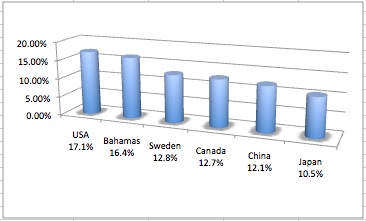 Bearing in mind the details of exactly what other nations have included as educational expenditures, if  the spending on The Department of Education, The Ministry of Education, The College of The Bahamas, The Bahamas Vocational Technical Institute alone are compared, The Bahamas still ranks second in the countries considered at 16.1% of spending.3

Based on the raw numbers, spending is obviously not the problem. Comparing The Bahamas expenditure to 27 other countries it still ranks 8th.

Before the country considers doubling education spending a cost benefit analysis is required. Answers to the following questions should be a priority:

Ideas like Charter Schools and School Choice for example should be on the table. After all the objective is supposed to be educating Bahamian children, not a turf war over who gets to spend more taxpayer money.