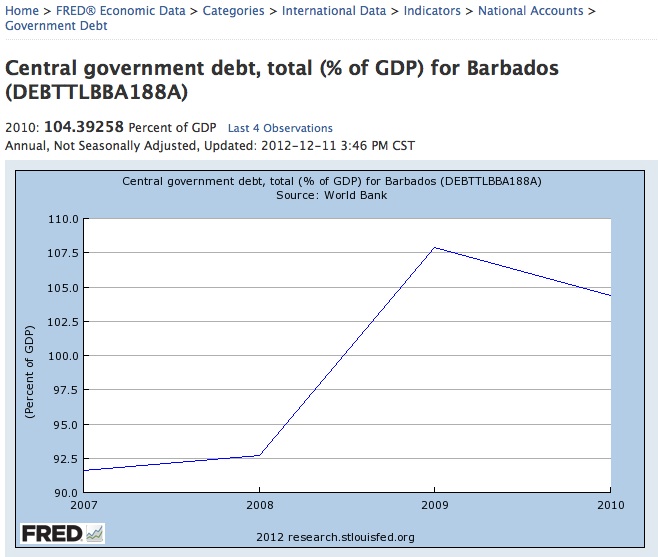 Mr. Owen Arthur, former Prime Minister of Barbados, was in Freeport, Grand Bahama recently to encourage The Bahamas to implement a value added tax (VAT) like he did in Barbados because of the mounting government debt and deficits there.

Coming on the heels of Mr. Arthur’s recommendations, when it was thought things couldn’t get much worse in Barbados, an article from Caribbean 360 states that S & P has downgraded Barbados yet again, "to negative from stable… …for the island that has “fallen back into recession”."

Following is an example of taxation, and by extension, the cost of living in Barbados, as confirmed by an owner in the automotive business.

Political leaders like Mr. Arthur, seldom connect the dots of government borrowing, spending, taxing and regulating with a declining economy. With rumours circulating that The Bahamas government borrows to make payroll as revenue has slipped so badly, are we far behind Barbados?

The solution Mr. Arthur offers seems to be more of the same tax, spend and regulate policies, which causes investors to retrench even further and the problems are exacerbated.

The introduction of VAT will be a further stake in the heart of The Bahamian economy if the government does not revert to its correct role of maintaining peace and justice.

The short answer is The Bahamas needs to study the economic path of Texas or North Carolina, for example. Instead of policies that discourage investment and job growth, pursue policies that encourage the creation of wealth. The government needs to hold the line on spending and reduce taxes and regulations to help alleviate concerns of jittery investors, so the economy can begin to get back on track.

Bahamians should prepare themselves for many surprises of worsening government policy when the "ideas" like VAT being recommended by Mr. Arthur and others fail to increase government revenue enough to cover their continued spending.