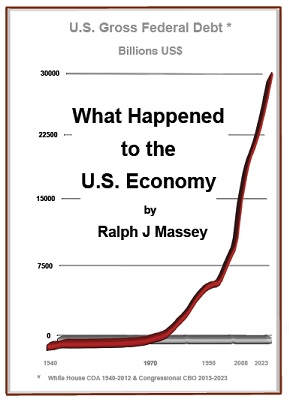 The following is the“Narrative” or “Synopsis” of the author’s 13,000 word account of “What Happened to the U.S. Economy”. Download the complete essay (pdf) by clicking here…

America is facing economic and political crises of enormous proportions. More than ever before…politicians, citizens and the media are polarized on a number of economic, political and cultural issues. This narrative will focus solely on the domestic economic crisis.

In this regard, the author believes that the U.S. got to where it is in two major steps with the New Left and the Far Left. The critical pivot point in this narrative was the election of President Barack Obama in late 2007.

But first…this situation should be put into perspective. Although it may not be apparent to many, the most obvious economic development after 1971 was America’s willingness to “Spend, Borrow & Print” well beyond its willingness to tax…its income.

In 1940 the total Federal debt was $51 billion (or $0.5 Trillion); today it is over $17,000 Billion (or $17 Trillion); and is expected to exceed $26 Trillion by 2023. The Government today borrows 40 cents of every dollar it spends; and it prints money at an annual rate well beyond the annual growth of the things that it produces. This creates the likelihood  of future “adverse unintended consequences”. They are longer-term adjustments that can include hyperinflation, sustained high levels of unemployment and social unrest.

But…let’s go back to the beginning, the Keynesian Revolution in Economics that began in the 1930s.

John Maynard Keynes (1883-1946) was the most important economist of the first half of the 20th Century. He looked at unemployment in Great Britain and wrote his General Theory of Employment, Interest and Money. He addressed what a government could and should do to end the scourge of unemployment.

He assumed and asserted that free markets could not be relied upon to cause a spontaneous rebound from a slump in economic activity; it was the excessive saving of the “wealthy” that caused a shortage of demand and “unnecessary” unemployment. The solution was direct government intervention to boost demand…specifically government spending and preferably fiscal deficits. According to Keynes this would “save” capitalism.

One cannot understate the “clean sweep” of academia and government policy-making that this message produced.

In the United States, for instance, Paul Samuelson’s 1948 Economics college text became the introduction to Keynesian theory. An estimated 4-million copies in 19 editions and 41 languages were sold. Everywhere Keynes overwhelmed those who saw the future adverse economic consequences and the proven longer-term effectiveness of free markets and economic freedom.

Then Milton Friedman (1912-2006) became the most influential Conservative economist and Keynesian critic in the second half of the 20th century. His monumental work on the tendency of people to save and the role of money and governments in causing and amplifying business cycles effectively undermined Keynesian economics.

In the 19 editions of Samuelson’s Economics Friedman’s name does not appear until the 10th edition in 1976 and then only in the footnotes. In the 1985 edition Samuelson “conceded that early Keynesianism had benefited from the ‘rediscovery of money’. Money definitely mattered.”

That’s a thumbnail sketch of past economic thinking.

Question: But what did the politicians and citizens of America learn from this controversy?

Answer: In the short-run government intervention and spending could stimulate the economy and relieve human hardship; AND…in a popular democracy like America…it could secure critical popular votes. It was as if Friedman’s message on the virtues of monetary stability and fiscal responsibility fell on deaf ears; and “Spend, Borrow & Print” was embraced by both parties.

But Milton Friedan did effectively promote the concepts of limited government and free markets with world leaders such as Margaret Thatcher and Ronald Reagan; and he even had some success with dictatorships in China and Chile.

In academia it was powered by the ideas of Professors Cloward and Priven at Columbia University, principally their strategy of “Non-Reform Reform” of 1966 and by Saul Alinsky’s book, Rules for Radicals: A Pragmatic Primer for Realistic Radicals published in 1971. Rules became the primer of the Far Left, a “veritable blue-print for a socialist revolution in America that Alinsky called ‘Hope and Change.’” This book’s historical importance cannot be over-stated since it became a vital part of President Obama’s core beliefs.

According to François Furet (1927-1997), the French historian in The Passing of an Illusion: The Idea of Communism in the 20th Century stated that –

Liberty and equality were “unlimited promises that proved problematic as soon as anyone attempted to apply them to society…For such abstract promises create an unbridgeable gap between people’s expectations and what the society can actually offer them. They kill off any debate or agreement on the limits of democracy.”

This did happen in America. The New Left did emerge; and it was built from the remnants of –

The author contends that the “First Revolutionary Step” taken by the U.S. Government was the mandated reckless and ill-advised financial behavior of the “Affordable Home Ownership for All” initiative. It was a true Socialist Dream or Illusion; and it produced the second Great Depression, the end sought by the “Radical Socialists”. It was a Non- Reform Reform that used the welfare benefits of a popular democracy to destroy “capitalism”.

AND…it set the stage for the emergence of Barack Obama as a “viable” Presidential candidate, a man of “many gifts but precious few accomplishments”.

He was the “Perfect Stranger”, a candidate who was throughly grounded in socialist ideology beginning in childhood; but who, as a Presidential candidate, convincingly misrepresented himself as a moderate pragmatist…the champion of “Hope and Change”. He was unchallenged on his resume and fitness for office by the national media and his political opposition. Senator Obama disarmed his opponents and achieved a true Bloodless Coup.

He said his first priority was jobs. BUT…the economy has not bounced back sharply as it did with all the recessions of the last three-quarters of a century. The country has fallen below its long-term economic growth path and the level of job creation associated with that historic rate of growth. This is the growth that creates jobs for school leavers.

But his main objective, in fact, was not jobs…it was socialist change. For instance, with ObamaCare, his signature piece of legislation, public expenditures are expected to be up to five times the amount forecasted in the Bill; the new taxes and fees imbedded in it do adversely affect employment; and compliance will be policed by the Internal Revenue Service with a new army of bureaucrats allegedly 16,000 strong with over 30,000 pages of regulations. That’s Radical Socialist reality.

The unintended consequence of its “Spend, Borrow & Print”, Radical Socialism and its Unlimited democracy is a country now on the edge of an economic “Abyss”.

The optimist looking at the future can point to the riches of the country and the possibility that a suffering and enlightened electorate may elect courageous leaders who will end the Radical Socialism of the Far Left and put the country back on its historic path of economic growth.

Such an optimist may also wonder about the election and re-election of Barack Obama…the gifted presidential candidate and Perfect Stranger…who is likely to make the welfare of the average American materially worse rather than better.

"The views presented here are those of the author and not necessarily those of the Board and Members of The Nassau Isntitute."