We cannot allow ourselves to believe that war is becoming defunct

A recent meeting of the Mont Pelerin Society I organised in the Galapagos Islands on the theme of "evolution, the human sciences and liberty" brought together some of the world’s leading neuroscientists, evolutionary psychologists, geneticists and social scientists to discuss what answer recent advances in these human sciences provide to the fundamental question, "what is human nature?".

One session was on the human animal as a warrior. Richard Wrangham provided an excellent summary of evidence on the evolutionary origins of human violence following his path-breaking book (with Dale Peterson), Demonic Males. He argued persuasively that war is part of our evolutionary psychology (particularly in males). His Harvard colleague Steven Pinker accepts this but argues that because of a complex set of social and cultural factors war may now be defunct. This was the view I disputed in my own paper.

I read Professor Pinker’s monumental door-stopper of a book, The Better Angels of Our Nature, in my study in New Delhi in May. I could not help thinking that I was about six minutes flying time away from nuclear missiles from Pakistan to my west, and that to my north the heavily armed People’s Liberation Army had just made an illegal incursion 12 miles into Ladakh. This made it difficult to believe that Professor Pinker’s "better angels" were about to take over the world.

My own view of human nature was heavily influenced by David Hume, who wrote: "There is some benevolence, however small … some particle of the dove kneaded into our frame, along with the elements of the wolf and serpent." From Professor Pinker’s comprehensive survey of the mounting neuroscientific and socio-biological evidence, it is clear that the genial Scot, sitting in his study contemplating his fellow creatures, had got it right.

Where Professor Pinker has gone wrong is in attributing what he terms the Long Peace to the various social processes he discusses at length; they have allowed the dove to tame the wolf and the serpent in at least the developed countries. In my own book on war and peace, In Praise of Empires, I developed a framework that emphasised the importance of empires (or global hegemons) – the equivalent of Thomas Hobbes’ Leviathan in international affairs – in maintaining global order and thereby peace in an otherwise anarchical society. I surveyed the rise and fall of empires since antiquity to show how they provided the order needed to pursue the elementary and universal goals that David Hume maintained any society must pursue for any social life to exist. These are: first, to secure life against violence that leads to death or bodily harm; second, that promises once made are kept; third, the stabilisation of possessions through rules of property. Through their Pax, these empires maintained peace and prosperity, and their decline and fall led to both domestic disorder and the disintegration of the enlarged economic spaces they had created.

True, these ancient empires did not seek to end various barbarous violent practices that were very much part of their "cosmological beliefs", and Professor Pinker is right in stating the importance of what he calls the "civilising and humanitarian processes", whose evolution I also traced in my Unintended Consequences. But nevertheless these have been insufficient to tame the instincts of the wolf in all civilisations, and the role of empires in maintaining peace and prosperity in their domains cannot be gainsaid.

Thus, despite its abhorrent cultural practices by the standard of contemporary norms, the Roman Empire had, through its Pax Romana, brought unprecedented peace and prosperity to the inhabitants of the Mediterranean littoral for nearly a millennium. When it collapsed, the ensuing disorder and the destruction of the imperial economic space led to a marked fall in the standards of living of the common people inhabiting the fallen empires. 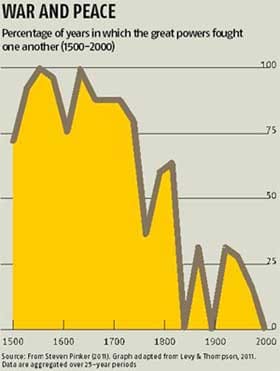 In his history of war and peace, Professor Pinker completely neglects the rise and fall of empires. The graph depicts his Long Peace. It does not, as he claims, show that war is now defunct. For it depicts the long struggle for the mastery of Europe, to create another Roman empire (albeit Holy) after the fall of Rome, and the success first of the British in the 19th century and then the United States after the Second World War in creating global empires that mitigated international anarchy.

Thus, during the post-medieval period since 1500, with the consolidation of European nation-states, religious wars were fought to a stalemate. They only ended with the Peace of Westphalia in 1648. But after a brief lull of peace, they resumed their conflicts in wars for the mastery of Europe – till, with its victory in the Napoleonic Wars, Britain established its global imperium in 1820. But by 1870 Britain’s long imperial decline had begun. Challenged by the emerging great powers, Germany and the US, and temporarily Russia, the British were willing but unable to maintain their hegemony.

The US, which became a partner rather than a competitor of Britain in the First World War, thereafter turned inwards and was unwilling to take over or share Britain’s imperial responsibility for maintaining global order. This led to the global disorder of the interwar years. It lasted till after the Second World War, when a duopoly of empires (the US and the Soviet Union) succeeded in maintaining some global order – with the mutual assured destruction of nuclear weapons preventing a direct war between the two superpowers, and their continuing competition being limited to proxy wars. With the implosion of the Soviet Union, the US became the sole superpower, and the era of warfare depicted in Professor Pinker’s graph came to an end.

Hence, the Long Peace is the result of the empires established by Britain in the 19th century and by the US in the late 20th century. With the West again turning inwards, and the current global order being threatened by the rising power of China, there is an emerging struggle for the mastery of Asia. India is at the centre of this coming maelstrom. It cannot afford to believe that the dove in our nature has now replaced the wolf in international relations.

Deepak Lal is the James S. Coleman Professor Emeritus of International Development Studies at the University of California at Los Angeles, and a senior fellow at the Cato Institute.