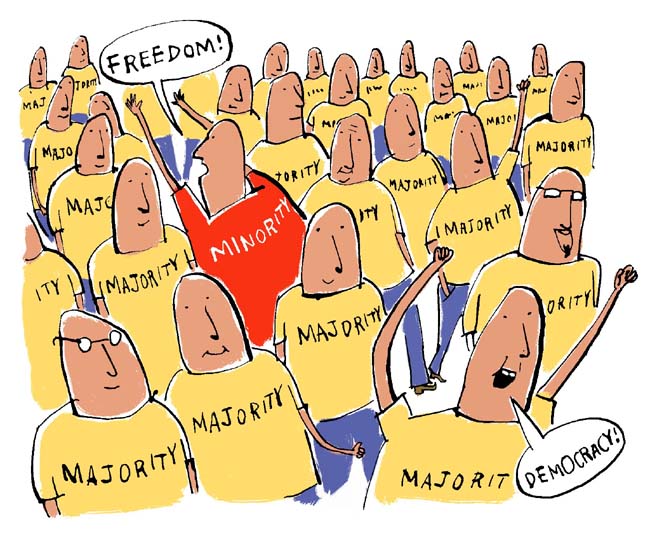 A fundamental fallacy of our time is that democracy is the open-sesame to peace, freedom, and prosperity. The political events surrounding what was called the ill-fated “Arab Spring” a couple of years ago was a based on the idea that “democracy” would solve all the problems of any society. But democracy in itself does not define or guarantee a free society. History has told many stories of democratic societies that have degenerated into corruption, plunder, and tyranny.

A little over 80 years ago Adolf Hitler came to power partly on the basis of the democratic electoral successes of the Nazi Party in German election during the Great Depression. Indeed, it is worth recalling the mass appeal that both the Nazi and Communist parties had in Germany in the early 1930s during the twilight of the Weimar Republic.

In the German national election on July 31, 1932, Hitler’s National Socialists emerged as the largest party represented in the parliament (though not a majority), while the Communist Party came in a strong third behind the Social Democrats. In the last free election, on November 6, 1932, before Hitler came to power in January 1933, the Nazis lost seats, but still were the largest parliamentary party, with the Communists still in third place but gaining on the Social Democrats.

Neither the Nazis nor the Communists were shy in letting the German voters know what was in store if they came to power. Each clearly told the German electorate that if they, respectively, came to power they would use such a political victory to impose authoritarian controls over the society in the name of building a new collectivist paradise. The National Socialists promised a race-based nationalist vision for Germany. The German Communist Party promised a class-based socialist utopia.

Indeed, the Austrian economist Ludwig von Mises observed in 1926 that many Germans “are setting their hopes on the coming of the ‘strong man’—the tyrant who will think for them and care for them.” Men have sold their freedom, even through the ballot box, when they have been seduced by the promises of political paternalism.

In today’s world, especially in Western Europe and North America, such extreme forms of tyranny have little appeal for most people. Few are ready to vote away their freedom for a totalitarian utopia. No, today people merely wish to use the state for mutual plunder through government intervention and coerced welfare redistribution.

What is practiced in the democratic nations of the world is what in 1896 the Italian economist Vilfredo Pareto called “bourgeois socialism”—the use of the state by a vast array of special-interest groups for trade protectionism, income subsidies, monetary manipulation, and domestic regulations to stifle competition.

Furthermore, Pareto also understood over a hundred years ago what Public Choice economists in the twentieth century came to call the asymmetrical incentives resulting from the concentration of benefits and the diffusion of burdens arising from government intervention in a democratic system. Explained Pareto:

“Let us suppose that in a country of thirty million inhabitants it is proposed under some pretext or other, to get each citizen to pay out one dollar a year, and to distribute the total amount amongst thirty persons. Every one of the donors will give up one dollar a year; every one of the thirty beneficiaries will receive one million dollars a year.

“The two groups will differ very greatly in their response to this situation. Those who hope to gain a million a year will know no rest day and night. They will win newspapers over to their interest by financial inducements and drum up support from all quarters. A discreet hand will warm the palms of needy legislators, even of ministers. In the United States, there is no necessity to resort to such underhand methods: these deals are made in the open; there is an open market for votes just as there are markets in cotton and grain.

“On the other hand, [Pareto continued] the despoiled are much less active. A great deal of money is needed to launch an electoral campaign. Now there are insuperable material difficulties militating again asking each citizen to contribute a few cents . . . The individual who is threatened with losing one dollar a year—even if he is fully aware of what is afoot—will not for so small a thing forego a picnic in the country, or fall out with useful or congenial friends, or to get on the wrong side of the mayor or the prefect! In these circumstances the outcome is not in doubt: the spoliators will win hands down.”

What we have, in other words, is a system of democratized plunder, under which, as Frédéric Bastiat said, everyone attempts to use the state to live at the expense of everyone else.

Freedom as the Right to Live for One’s Self

We need to remember that democracy, in essence, is merely a mechanism for the peaceful selection of political officeholders. As such, it is certainly superior to revolutions and civil wars. As has often been said, democracy replaces bullets with ballots. Its inestimable importance for this purpose should never be discounted or forgotten.

But democracy is not liberty. The meaning of liberty was explained by the French classical liberal Benjamin Constant in a famous lecture he delivered in 1819, The Liberty of the Ancients Compared with that of the Moderns. Said Constant:

“First ask yourselves, Gentlemen, what an Englishman, a Frenchman, or a citizen of the United States of America understand today by the word ‘liberty.’ For each of them it is the right to be subject only to the laws, and to be neither arrested, detained, put to death or maltreated in any way by the arbitrary will of one or more individuals.

“It is the right of everyone to express their opinion, choose a profession and practice it, to dispose of property, and even to abuse it; to come and to go without permission, and without having to account for their motives or undertakings. It is everyone’s right to associate with other individuals, either to discuss their interests, or to profess the religion which they and their associates prefer, or even simply to occupy their days and hours in a way which is more compatible with their inclinations or whims.

“Finally it is everyone’s right to exercise some influence on the administration of the government, either by electing all or particular officials, or through representations, petitions, demands to which the authorities are more or less compelled to pay heed.”

Constant, we see, believed that an essential element of liberty is the ability to participate in the political process, with elected officials answerable to the citizens.

But “democracy” is not the core ingredient of human liberty. That core is the individual’s freedom to be self-governing, for each to be free to live his own life for himself, secure in the recognition and the respect for his individual rights to his life, liberty, and honestly acquired property.

By extension, he must leave all other individuals alone to be the same. His relationships with them must be based on consent, without government restriction or regulation.

The task of government is to secure the individual in his freedom from violence and coercive interference, to protect his life, liberty, and property from aggression. When it goes beyond this his liberty has been abridged, even when that government is democratically chosen.

If there were to be a triumph of democracy around the world, it would be a hollow victory if it does not grow out of the more fundamental idea of individual liberty. Otherwise, men everywhere will continue to live under a tyranny—the tyranny of electoral majorities determined to use the government to benefit themselves at others’ expense.

Dr. Richard M. Ebeling is the BB & T Professor of Ethics and Free Enterprise Leadership at The Citadel in Charleston, South Carolina, He was formerly professor of Economics at Northwood University. Was formerly president of The Foundation for Economic Education (FEE), was the Ludwig von Mises Professor of Economics at Hillsdale College in Hillsdale, Michigan, and served as president of academic affairs for The Future of Freedom Foundation.