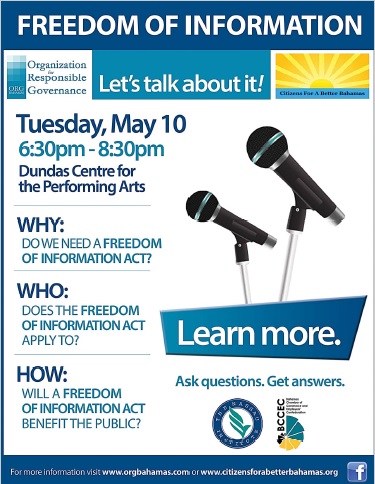 ORG Bahamas Foundation and Citizens For A Better Bahamas are co-hosting a FREEDOM OF INFORMATION Public Education Forum at 6:30pm – 8:30pm Tuesday, May 10, at The Dundas Centre for the Performing Arts on Mackey Street.

Let’s Talk About It!

Join us as we explore this key topic of accountability and transparency; the first step towards responsible governance.

NASSAU, New Providence, (April 28, 2016) – Organization for Responsible Governance (ORG), a new nonprofit, nonpartisan organization that advocates for open, accountable and responsible governance, is calling for the government to seek greater public participation in the creation of a Freedom of Information Act.

The Minister of Education recently announced a series of public consultation meetings on the proposed Freedom of Information Act (FOIA)  to be led by the government’s appointed Commission; however, ORG has observed that the meetings have not been well advertised, information on the government’s recommendations for the bill has not been made available, and, subsequently, the public has not been well engaged -the initial meeting in Nassau drew only 15 attendees and the second in Grand Bahamas had only five.

ORG sees a critical need for public education on the importance of a strong and fair Freedom of Information Act, and believe the government’s efforts have not been either effective or sufficient.  As such, ORG will hold an independent, Public Education Forum on Tuesday, May 10th, from 6:30-8:30 p.m. at the Dundas Centre for the Performing Arts. (See info above and graphic)

The event currently has the support and participation of Citizens for a Better Bahamas, The Nassau Institute, The Bahamas Chamber of Commerce and Employers Confederation, The Bahamas Bar Association, Civil Society Bahamas and We the People. This list is expected to grow.

ORG promotes the tenants of good governance in the Bahamas. Good governance is internationally recognized as open, transparent and participatory and a strong Freedom of Information Act is essential to the successful inclusion of citizens in their government and the eradication of corruption within government.

“There seems to be a decided lack of interest or investment by the government in passing and implementing an effective FOIA,” said ORG Executive Director Matthew Aubry. “There has not been sufficient public education and engagement on the elements of the bill, no meaningful engagement of civil society and no clear evidence that the Commission has benchmarked the Bahamas legislation against international standards.”

ORG proposes that the public consultation efforts be expanded to allow the education of Bahamians on what a Freedom of Information Act means so that they can provide meaningful input on the bill. ORG also proposes that the government appointed Commission engage local and international Civil Society Organizations to ensure that the Bahamian FOIA is strong and holds up to international standards.

Lana Lee Brogdon, Chair of ORG’s Public Education and Messaging Committee said,“ORG and the other Civil Society Organizations want to help engage the public in this critical legislation. This is too important for us to just stand by and do nothing because it will affect our children and the future of our country. We need all individuals and organizations to come out on Tuesday, May 10th to the Dundas to learn more.  We have invited the government to join us and provide their presentation and we hope they take this as seriously as we do.”

Although a Freedom of Information Act was passed in 2012, it was never enacted, reportedly based on problems identified in the language of the bill.

In May 2015, a new FOIA bill was proposed which was to be tabled in May 2016 and a commission was appointed to review the legislation. While local and international watchdog agencies recognized improvements in the bill, they noted that it still fell short of international best practices and issued recommendations for correction. In the past year, no adequate information has been issued on the status of the FOIA bill.

On April 13th, the Minister of Education announced that the tabling of the bill would be delayed until “probably” November and a series of public consultations would be held by the Commission to seek public comment. Consultations have been held in Nassau and Grand Bahama in the past week and will be held in Eleuthera, Exuma and Abaco in early May.

The Organization for Responsible Governance-705F (ORG) , a membership based non-profit foundation founded in 2015, is comprised of Bahamian citizens, residents, student and youth organizations, civic groups, community leaders, businesses, associations and civil society. This diverse and inclusionary group will focus on initiating a national dialogue on core socioeconomic and geopolitical concerns affecting The Bahamas, including open and accountable government; fiscal, energy, educational, economic, immigration and constitutional reforms; the equitable enforcement of the rule of law; monetary policy; trade agreements and the ease of doing business.