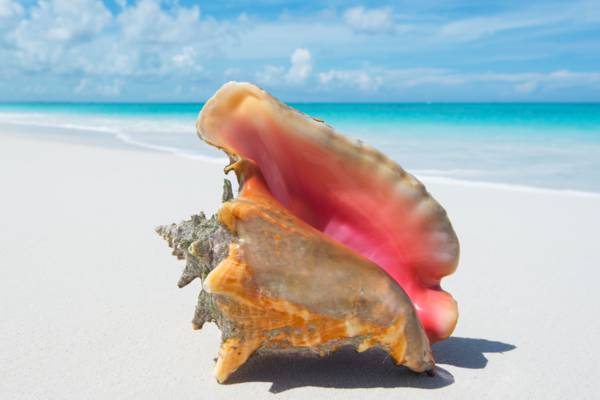 Five hundred years ago, the original Lucayan inhabitants of the Bahamas lived in a completely different world than the one we know today.

Seals and iguanas crowded the shorelines; lobster, conch and fish were abundant. Evidence for this are the large mounds of discarded conch and other shells and fish bones that are a feature of Lucayan archaeological sites.

And since slow-moving conch are found in shallow water, they became a staple food for the first European settlers – giving rise to their nickname, “conchs”, which persists to this day in the Florida Keys. In the Bahamas the sobriquet mutated into “conchy joe” – meaning a white or mixed-race Bahamian.

When South Florida was an impenetrable wilderness, Bahamian ‘conchs’ looked upon the Florida Keys as northern out islands. In fact, Key West is famously known as the conch republic, and early American dictionaries refer to conchs as “illiterate settlers of the Florida Keys.”

But today, the esteemed queen conch – the one we all love to eat – is in serious trouble throughout the region. Florida’s conch fishery collapsed decades ago, and conch harvesting was banned throughout the continental United States in 1986.

And with growing evidence that conch populations were starting to collapse in other territories, export permits were required for all queen conch trade in 1992. Exports from the Dominican Republic, Haiti and Honduras (which used to supply the bulk of US demand) have now been suspended.

So most of the 1,000-plus metric tons of conch eaten by Americans every year is imported from countries like the Turks & Caicos, Belize or the Bahamas. Although threatened by overfishing, these conch populations are in better shape because of the protection afforded by marine reserves and restrictions on the use of SCUBA gear by fishermen.

According to the Harbour Branch Oceanographic Institution in Fort Pierce, Florida, these factors “allow the survival of deepwater ‘refuge’ populations – ensuring at least some reproduction to replenish the regional stocks.”

In the Bahamas, the 176-square-mile Exuma Cays Land and Sea Park was made a no-take fishery zone in 1986 by the Bahamas National Trust. Although some poaching does occur, scientists agree that the park is a major source for the replenishment of conch, lobster and grouper stocks outside its borders.

Research shows there is 14-20 times more conch larvae in the park than outside, proving the value of protected areas for marine conservation. And this is in the face of evidence that shallow water conch populations throughout the Bahamas are heavily overfished, and deep water populations are reaching the point of overfishing.

In the 1980s, Florida began looking for ways to rehabilitate its conch population. And the US Fish and Wildlife Conservation Commission began operating a hatchery in 1991 at the Keys Marine Laboratory on Long Key to help conch stocks recover.

The hatchery was run by Bob Glazer of the Florida Marine Research Institute – one of the top experts in the field. After years of research, Glazer launched a conch restoration programme for the Keys that both releases hatchery-produced conch, and transplants adult conch from coastal waters to offshore breeding aggregations.

As a result, “conch populations in the offshore areas along the reef are recovering vigorously,” Glazer told Tough Call recently. “The nearshore population is not recovering, and these conch do not reproduce. However, they used to reproduce. We are investigating the reasons why they have stopped. It can be anything from chemicals in the environment to changes in water flow and water temperature.”

Conch reproduction also stops when populations fall below a critical density. That’s because – like groupers – conch must gather in large spawning aggregations to breed. A few days after the eggs are laid, they hatch into larvae, which can float more than 100 miles from their point of origin. And about a month later the larvae settle on the seafloor and metamorphose into juveniles – miniature versions of the adult conchs we are all familiar with.

Juvenile conch bury themselves in the sand to hide from predators, spending more time on the surface as they grow. Conch feed near the bottom of the food chain, eating algae and detritus in the sand. They take four years to mature and can live as long as 20 years. But they are ill-prepared to deal with human fishing pressure.

In fact, scientists say that, throughout the region, only the offshore Pedro Bank in Jamaica and the Exuma Cays Land and Sea Park have average densities greater than the threshold for reproduction (50 conch per hectare), although there may be smaller patches of higher density in other areas.

So could mariculture prevent the seemingly inexorable loss of this valuable resource?

Well, it’s hard to say. There is only one commercial conch farm in the world – on Provo in the Turks & Caicos Islands. It was developed over the past two decades by 63-year-old Chuck Hesse, an American permanent resident who, by most accounts, is a celebrity in the field.

Hesse has degrees in biology and marine engineering, and was a SCUBA instructor for the US Navy in his youth. Now, as chairman and CEO of Trade Wind Industries, he operates the Caicos Conch Farm. Over the years, the farm developed patented technology to raise millions of conch to market size on its 10-acre plant, using 260 acres of underwater “pasture”.

This technology is expensive, but Hesse is convinced there’s plenty gold in them thar conch: “This is the ideal mariculture animal for this region. Conchs have no known diseases or parasites, are in short supply, are grass eaters, and are in great demand. What other species has as much going for it? And it is higher in protein the most other seafood, and second only to salmon in Omega-3 fatty acids!”

Every week Hesse’s conch farm ships thousands of juvenile filets to Miami – dubbed “ocean escargot”. He also ships live-in-the shell product for specialty restaurants and the aquarium trade. Within a year or two, he expects to be exporting a million pieces – about 200,000 pounds – of conch a year. Currently, all of the farm’s output goes to a single Miami distributor, which gets $20 a pound from ‘white tablecloth’ restaurants for the three-year-old live product.

Hesse says the farm doesn’t compete with local fishermen: ” This is strictly an export business. “We only sell locally as a way to offer visitors an opportunity to taste our products.”

And a hundred thousand visitors a year have made the farm a popular eco-tourism attraction. According to the Turks & Caicos Tourist Board: “Here you can watch how the process is done, enjoy a show with the two trained and very friendly conchs, see conch pearls and even purchase fresh conch for a fabulous conch salad.”

Hesse remains eternally optimistic about the prospects for conch mariculture. He thinks the survival of wild conch depends on the establishment of conch farms around the region to reduce fishing pressure.

Although breeding complexities combined with the three-year grow-out period to produce a reasonable-sized animal are big drawbacks, Hesse is seeking to convert his conch farm experience into an international franchise.

“We are it when it comes to conch farming,” he told Tough Call recently. “We have invested $12 million to make all the mistakes over 20 years. We can now deliver, and we want to do so in locations that will welcome us. Freeport and Nassau are wonderful locations, and both have the cultural quirk of liking their conch fresh from the shell.”

Two years ago, Hesse was involved in a failed bid to set up a conch farm on Grand Bahama with funding from the International Finance Corporation – an arm of the World Bank. The IFC provides loan and equity financing for private sector projects in developing countries, but eventually considered the Bahamas too rich to qualify for funding.

In addition to marketing conch meat to restaurants and live juveniles to the aquarium trade, the Grand Bahama farm would have been able to supply dried conch offal to Asian markets, culture valuable conch pearls, and sell conch shell and pearl jewelry to visitors. A related proposal to set up an egg farm on Eleuthera to help rebuild wild conch stocks also came to naught.

But Hesse says the project could be revived in a heartbeat if there was interest from Bahamian investors: “I want to be a significant player in the restoration of the conch species throughout its Caribbean and Bahamian range. The farm process is a most important step.”

Meanwhile, he is working with TCI investors to set up a conch farm/eco-tourist attraction on Grand Turk called Cockburn Village & Farm. It will be the first conch farm built specifically for commercial operation – unlike the Caicos plant, which began as a research and development facility.

“We would love to do what we are now proposing for Grand Turk on Grand Bahama,” Hesse told Tough Call. “Alas, we are but simple conch farmers, and doing such a deal requires a bit more skill then we possess.”

This article was first published in The Tribune on Wednesday, June 8, 2005.