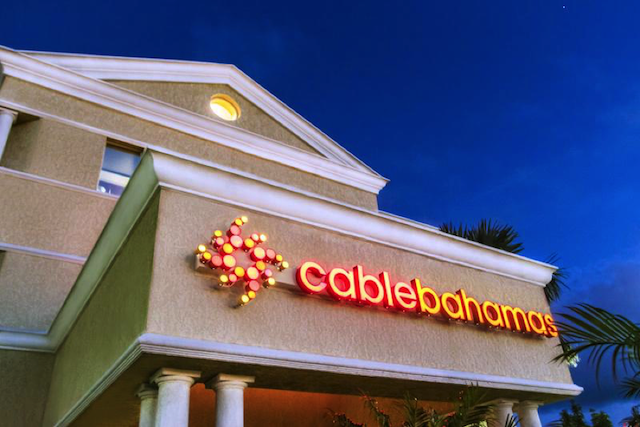 To receive those grainy transmissions (on channels 2, 4, 7, and 10) you had to install costly rooftop antennas (a pain in the neck to take down during hurricane season) along with special “signal boosters”. And even then, bad weather would produce a blank, snow-filled screen.

In America, cable television began cramping the style of over-the-air television networks in the 1970s. The first satellite delivery of programming to cable occurred in 1976 when Home Box Office televised Mohammed Ali and Joe Frazier’s “Thrilla in Manilla”.

That same year a Stanford University professor built the first consumer direct-to-home satellite system. It was a large dish-shaped antenna used to pick up cable TV programmes distributed by content providers (like HBO) to their subscribers.

In the early 1980s Bahamians went crazy over this space-age technology . Sales of big-dish satellite receivers soared, and anyone with a passing interest in electronics could set up shop and make a fortune supplying local demand.

The signal quality was exceptional, letting us entertainment-starved islanders tap into the wealth of new programming emerging from American media companies. And at first, you had only to lay out ten grand or so for a dish that occupied half of your yard.

But in 1984 broadcasters began scrambling their signals, forcing consumers to buy expensive decoders and pay monthly fees. This led to satellite theft (the signal, not the dish). According to one account, of the 2 million satellite receivers made in the US between 1986 and 1995, less than a quarter were legally receiving services.

Whole cottage industries sprang up to “decode” set-top boxes so that signals could be received in the clear. But this freewheeling piracy was largely killed off in the early 1990s by two big developments.

The first was the formation of DIRECTV in the United States, which offered as many as 200 channels via a low-cost, small-dish antenna. The second was the Ingraham administration’s legalization of private broadcasting, which led to a communications revolution that changed our lives.

Broadcasting had been a government monopoly ever since ZNS was set up as a hurricane warning service in a small room over the Snappy Hat Shop on Bay Street in the 1930s. A public corporation was later formed to operate the station – which introduced television service in 1978.

This stifling monopoly was finally broken in 1992 when the new Free National Movement government licensed private radio stations. And shortly afterward, bids were invited for a private cable television service – something the previous Progressive Liberal Party government had talked about for more than a decade.

Meanwhile, the PLP – still smarting from its historic election defeat in August, 1992 – was in a blind rage. After their rigid 25-year control of broadcasting (and all the other levers of authority), the old PLP power brokers were mortified at what liberalisation of the air waves might mean for ‘politics as usual’.

Former cabinet minister Paul Adderley wrote off most of the bidders as “racists greedy for power” and “foreigners acting immorally”. When challenged about such intemperate language in parliament, he retorted: “I don’t know what this country is coming to when a black man can’t call a racist a racist.”

Pointing out that cable TV was likely to be a profitable business as well as a powerful agent of “propaganda”, he said “it ought not to be controlled by any single political or economic sector to the exclusion of all others…the prime minister is between a rock and a hard place.”

It was no secret, though, that the PLP favoured the group that included former ZNS chief Charles Carter. Mr Adderley said the PLP (which hadn’t the slightest interest in opening up broadcasting when it was in power) would have insisted on a public/private partnership for cable television “to prevent the private gouging of money”.

This presentation conveniently overlooked the fact that the government had been gouging tax payers for decades to underwrite crude political propaganda on ZNS. In fact, during most of the 70s and 80s, ZNS was almost as politically constipated as Prensa Latina, the Cuban news agency.

The cable TV bids were opened in public in August 1993, but by the following spring we learned that the government had rejected all proposals – none of which were fully Bahamian to begin with. Eventually it became clear that a small Canadian outfit called Cable 2000 would win the day.

In October, 1994 the government gave a 15-year exclusive license to Cable Bahamas Ltd. The new company had a 49 per cent Bahamian stakeholding with the rest owned by Columbus Communications, a holding company formed by ex-Cable 2000 chief Phil Keeping, who sold his New Brunswick interests.

Within six months of the license agreement, New Providence householders were hooking up to cable. And in June of 1995 some 3,000 Bahamian shareholders bought $30 million worth of shares in CBL, with the government retaining a 20 per cent stake through BEC and Batelco.

The license called for a 40 per cent build-out throughout the Bahamas within three years. And the company’s $1 million performance bond was released in 1997, after it completed 46 per cent of its network. By that time (in addition to Grand Bahama and New Providence) service had been provided to settlements on Bimini, Abaco, and Eleuthera. This was soon followed by service to the Berry Islands, Andros and Exuma.

Today, cable is available to 96 per cent of the 91,000 plus households throughout the country (one of the highest ratios in the world). And broadband Internet service was added to the mix five years ago. According to one industry analyst, “CBL’s original investment commitment was $30 million; but to date the investment exceeds $180 million. And the company has created much more than a cable television network – it has literally changed the landscape of telecommunications as well as the country’s ability to attract and compete on a global scale.”

But some politicians are not satisfied, and are calling for a review of CBL’s license – which still has five years to go. During the recent budget debate, Independent North Long Island MP Larry Cartwright and Cat Island, Rum Cay and San Salvador MP Phil Davis said the government should take back CBL’s performance bond because cable service was not available in some of the areas they represent.

Experts say it would be cost-prohibitive to service the four thousand or so households in the few scattered communities that don’t yet have it: “As a public company, built upon the investment of Bahamian shareholders, they are fiscally obligated to make decisions that generate revenue, and not to unreasonably add costs,” one observer said.

And there is another argument behind the scenes – the question of a hike in the price of basic cable service. This was fixed at $30 per month for 36 channels in 1995 and has never been revised, although the number of basic channels has been increased to 54. But CBL’s revenues have nonetheless increased exponentially over the years – they were almost $50 million in 2004, producing an $11 million profit.

“The question of an increase is really a no-brainer,” one CBL employee told Tough Call. “The retail price has remained the same for a decade while costs have steadily increased. Signal fees, utility costs, salaries, facilities, and services provided have all increased, which squeezes our margins significantly.”

And now Cable Bahamas is moving into the Caribbean. Former CEO Rick Pardy was dispatched to Jamaica earlier this year to run Caribbean Crossings, a wholly owned subsidiary. His job is to build and operate a $50 million fibre-optic submarine cable between Jamaica and the southern Bahamas.

Caribbean Crossings has a majority stake in FibraLink Jamaica Ltd, which is already authorised to provide any type of telecommunications services within Jamaica, or between Jamaica and other countries.

An application to run the cable from Jamaica to the southern Bahamas was made to the Public Utilities Commission last November, but there has been no reply so far. When built, the cable would provide broadband services to our southern islands and tie Jamaica into CBL’s undersea link to the United States.

“This will allow services like distance education, telemedicine, digital cable television and GSM wireless services to be extended to those southern Family Islands,” a CBL spokesman said.”which will enhance their development opportunities.”

Since Caribbean Crossings built its fibre network to the US, the price of bandwidth to The Bahamas has been driven down by 75 per cent. As a result, proportionally more Bahamians use high-speed Internet than any country in the hemisphere.

But the Bahamas still lags far behind even Jamaica in the overall liberalisation of its telecoms sector. Since the BTC privatisation process collapsed in 2003, there has been little movement in this area.

And as a result, the BTC “monopoly” now has less than half of the long distance voice market…because of call-back and voice over Internet services.

In fact, BTC is now just a cell phone company with 1100 employees – compared to 260 or so at CBL. And experts predict that BTC’s value will only dwindle over time…losing forever all the hundreds of millions of tax dollars we have invested to pay for its lousy service.

Perhaps Messrs Cartwright and Davis should get the government to nationalise Cable Bahamas. We are certain that services to places like Rum Cay and North Long Island would follow in short order.

This article was first published in The Tribune on Wednesday, July 6, 2005.