This is part one of a presentation by Mr. LaFaive, director of the Mackinac Center’s Morey Fiscal Policy Initiative, for The Nassau Institute on Thursday, March 12, 2009.

Thanks Sidney (Dr. Sidney Sweeting, Direector, The Nassau Institute) for that kind introduction, and thank you all for such a warm welcome. There are two reasons that I’m truly delighted to be here this evening: To talk about a subject near and dear to my heart — economic development — and of course, to escape Michigan’s brutal winter.

At events like this I’m always reminded of a story about a famous British statesman and provocative speaker named Joseph Chamberlain, the father of Neville “peace in our time” Chamberlain. One time Chamberlain was the guest of honor at a dinner in a large British city. The Mayor was presiding, and when coffee was served he leaned over and said, “Shall we let the people enjoy themselves a little longer, or [should] we … have your speech now?” Hopefully you can enjoy your drinks and my speech simultaneously.

Growth and development are hot topics right now. Economic growth typically means increased real output of goods and services, and development usually refers to improved standards of living and quality of life. Both combined are often referred to simply as “jobs” by politicians and pundits because that’s vastly more personal.

In the face of a major worldwide economic contraction national governments everywhere are passing all sorts of large “stimulus packages” in the name of creating new jobs and saving existing ones. The U.S. stimulus package is so large — $825 billion — that if this bill were a country, it would have the 15th largest economy in the world. The question of the day is, “Do any of these things actually create net new jobs, growth and development?”

Indeed, to what degree any government interventions in the economy actually promote economic growth is an open question. It won’t surprise this audience to hear that governments everywhere, and at every level, meddle in their economies with narrowly targeted manipulations intended to bring about some particular type of economic outcome.

For example, America’s 50 states and thousands of local governments alone expend more than $50 billion annually via hundreds of “economic development” programs intended to “do something” to improve state and local economies. The empirical evidence suggests that we might all be better off if they just left everyone alone. 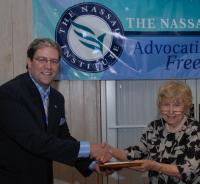 (Photo: Mr. LaFaive being thanked for his presentation by Mrs. Joan Thompson, President of The Nassau Institute)

In the states, these economic development programs, or “eco-devo” for short, run the gamut from business, sales, excise and property tax concessions, tax breaks for special “enterprise zones” (in some cases just a single business), and outright cash subsidies, sometimes disguised as “refundable tax credits.”

Politicians, their lieutenants, and countless cheerleaders for state “Industrial Policy” — a fancier term for government picking winners and losers in the marketplace — have no shortage of rationalizations for such programs: to revitalize a “blighted” area, improve worker job skills, or to (quote, unquote) “diversify” a regional economy or even a particular industry.

I’m especially sensitive to that last one, because my own beloved state of Michigan has been marching to the “diversification” drumbeat for many decades. Indeed, since 1947 every one of the last eight Michigan governors has introduced new departments or programs for the express purpose of “diversifying” the state’s economy. Michigan is not unusual in this, and it’s fair to ask, how’s that been working for my home state?

If Michigan’s economy has grown more diverse it’s in part due to an unhappy accident — our domestic automobile companies have either moved production to places with friendlier tax or labor climates, or been forced to shut down whole factories as they’ve lost market share to more efficient producers. In 1963, near the height of Michigan’s economic output and wealth, auto and auto parts industries accounted for more than 23 percent of state GDP. Today it’s just 6 percent.

Michigan is hardly unique in its persistent demonstration of the definition of insanity — doing the same thing repeatedly and expecting a different result. In doing research for this talk I found a reference from the 1970s to diversifying the banana economy in the Windward Islands. Economic diversification is practically a fad in certain circles.

Interestingly, Michiganders and Bahamians have a lot in common in this realm. By one measure Michigan’s two largest industries have long been automobiles and tourism. In the Bahamas, it’s tourism and finance.

In Michigan we have generous government programs to lure outside corporations and investment from outside our borders — as does the Bahamas. There’s a government tourism bureau that spends a few million every year trying to convince people to vacation in Michigan — an amount that recently got a massive increase recently when the legislature authorized $50 million in borrowing for tourism subsidies.

We’re not quite in the same league as the Bahamas Ministry of Tourism — which apparently spends $91 million — but who knows — with billions sloshing into the state from the new federal “stimulus” package, Michigan may get there yet.

In Michigan our politicians — with cheerleading from fans of government central planning in academia and among some business leaders — have been trying to diversify the state away from automobiles and toward something else that they select.

In the Bahamas, the same types are talking about efforts to diversify away from tourism and into agriculture.

Politicians and central planning elites obviously love this stuff, but rarely consider asking whether any of it does any good. And if not, why not? And what can states and nations do instead that really promotes economic growth and development?

There are mountains of studies on the topic covering everything from the efficacy of tax credit programs to (quote) “the role that the Junkanoo ethic has played in the economic success of the Bahamas (the richest country in the West Indies).”  I can’t give a complete summary without totally ruining your own drinks, but a brief overview and perspective may not be too painful.

Before diving in, let me emphasize that I don’t blame industries or corporations for taking advantage of existing tax break or subsidy programs. It’s fair to say that business managers actually have a fiduciary responsibility to use these existing programs to lower their costs.

It’s government and politicians who deserve the scorn here for continuing to follow this policy direction in the face of persistent evidence that their economic development, or “eco-devo” empires are at best a neutral force in our economic lives.

What is that evidence? Perhaps the most exhaustive is what’s known as a “meta” review of the extensive scholarly investigations on this particular subject. In 2004 economists Peter Fisher and Alan Peters from the University of Iowa undertook one of the most comprehensive of such projects. They noted that a common thread in the justifications for eco-devo programs was “industrial diversification or the promotion of high-technology industries.”

Their paper, called “The Failures of Economic Development Incentives,” tried to answer three questions about these programs:

First, do they improve growth and development compared to what would have happened anyway in their absence?

Second, is this development directed to helping low-income populations?

Third, “How costly to government is the provision of these incentives compared to alternative policies?” As with many previous literature reviews the findings were somewhat ambiguous, but on balance Fisher and Peters surmise that these programs are either ineffective, or the costs exceed the alleged benefits. I quote:

“The upshot . . . (we simply do not know) whether incentives induce significant new investment or jobs. Since these programs probably cost state and local governments about $40-$50 billion a year, one would expect some clear and undisputed evidence of their success. This is not the case. In fact, there are very good reasons — theoretical, empirical and practical — to believe that economic development incentives have little or no impact on firm location and investment decisions.”

Fisher and Peters also argued that “we need to begin by lowering (policymakers’) expectations about their ability to micromanage economic growth, and mak(e) the case for a more sensible view of the role of government — providing growth through sound fiscal practices, quality public infrastructure, and good education systems — and then letting the economy take care of itself.” It should be explained here that neither of these men are simply wild-eyed libertarians. Indeed, just the opposite. One of the scholars himself has done work for think tanks that could be described as aggressively statist.

In 2005 I and colleague Michael Hicks made a detailed study of Michigan’s “flagship” targeted incentive program, called MEGA, or the Michigan Economic Growth Authority. This Authority gives corporations credits against the state business in the hope of attracting non-Michigan job providers, or expanding existing ones. We created a statistical model that controlled for a host of job creation factors outside of the program’s influence, with the goal of isolating whether the program actually made any difference.

The results showed that over nine years, and after offering as much as $3 billion in tax breaks to 200 firms, the program had no impact on state employment, the unemployment rate, or per-capita personal income. Specifically, for every $123,000 in tax credits offered, one temporary construction job was created but all those disappeared within two years.

How about the record elsewhere? Maybe there’s something different about other nations — or at least Island nations — that make government development programs more likely to succeed there. I doubt there is, and the most recent incentive study I’m aware offers some insight. It’s a 2008 study in the journal, “Economic Development Quarterly” called, “The Ineffectiveness of Location Incentive Programs: Evidence from Puerto Rico and Israel.”

In a nutshell, the authors concluded that the programs led to short-run improvements in employment but did not improve the fundamental economic problems in the areas targeted. The specific Puerto Rico program they studied was repealed in the late 1990s because it was “arguably inefficient and probably ineffective for sustaining Puerto Rican economic growth.”

Why don’t these programs work? Many studies don’t address that, but I can suggest some broad theoretical explanations.

End of Part One

We send private Ponzi scheme organizers to prison for good reason. The puzzle is why people laud government for doing the same thing - just on a far greater scale?Gary M. Galles … (next quote)
%d bloggers like this: