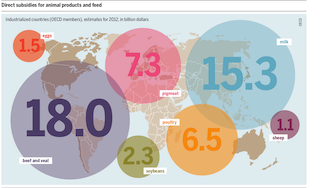 Recently the energetic Minister for Agriculture announced a $42M Five Year Plan to stimulate food production, roughly 8M per year. Considering that the annual estimates for the years 2002 – 2009 averaged about 3M per year the increase to $8M is a huge leap.

In earlier years Mr. Pierre Dupuch as the Hon. Minister of Agriculture took interest in banana production. The strategy then was to support banana growing with high tariffs on imported bananas as protectionist policy for the farmers to encourage more production. No one doubts that Mr. Dupuch made a concerted effort but in spite of the high tariffs on the imports the local growers were unable to supply the market with edible fruit at prices equal to or below that of the imports.

The above is an example of government funding with good intentions but when judged on the results turned out to be a failure.

“If you start a program that is a failure and you are in the private market, the only way you can keep it going is by digging into your own pocket. That is your bottom line. However, if you are in the government, you have another recourse. With perfectly good intentions and good will nobody likes to say ‘I was wrong’ when you can say, ‘oh, the only reason it is a failure is because we haven’t done enough.’”

It sure looks like government has decided more money for agriculture is the solution.

The Ministry’s objective is to “stimulate” food production with more money to bring the country “nearer to food security”. In spite of no evidence of a food shortage or the likelihood of one in the future, money is taken today from taxpayer’s pockets where there is a real shortage of that commodity.

Trying to fulfill a utopian vision of self-sustaining food production has unseen consequences. For example, the money to expand the government program is taken from Mr. Taxpayer who had saved up for a new suit. The other loser is the little tailor not hired to make the suit.

There is a long history of inept government involvement in farming. The grand schemes hatched in parliament have a way of fizzling out and there is nothing in the history of farming in the Bahamas to suggest that this one will be any different.

“Sometimes I think that government fits that old-fashioned definition of a baby: An alimentary canal with an appetite at one end and no sense of responsibility at the other”.