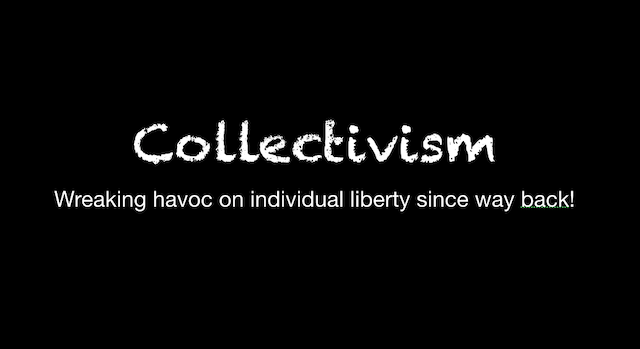 By Jaana WoiceshynAs a defender of business, whenever I read or hear collectivist claims that the Western ideal of individualism “harms society,” I cringe. Typically, the claimants belong to a group (such as  a race, a class, a language minority) the membership of which yields them collective “rights,” such as quotas for certain jobs or for university seats, guaranteed housing, income subsidies, or  other benefits–that others must provide them.

What do the claimants mean when they say that individualism “harms society,” and why do I cringe?

Individualism is the idea that each individual human being lives—and has the right to live—for his own sake and pursues his own happiness, as long as he does not violate the right of others to do the same. Accordingly, each individual is responsible for himself. Importantly, in an individualist society, each member is free to pursue their own interests and cannot enslave others or coerce them to collaborate.

From the collectivist perspective, such a society is a social paradise where everybody puts the group above oneself, keeping up their “brothers,” and lives harmoniously in prosperity, forever after.

I cringe at the castigation of individualism and idealization of collectivism, because it is only the former that makes civilized co-existence possible. Citing Ayn Rand again:

“Since knowledge, thinking, and rational action are properties of the individual, since the choice to exercise his rational faculty or not depends on the individual, man’s survival requires that those who think be free of the interference of those who don’t. Since men are neither omniscient nor infallible, they must be free to agree or disagree, to cooperate or to pursue their own independent course, each according to his own rational judgment. Freedom is the fundamental requirement of man’s mind.”

Witness all the collectivist experiments throughout history, from slave-owning Southern states in the United States, to Stalin’s Soviet Union, to Mao’s China, to today’s Venezuela. They have all been disastrous destroyers of human lives because of their anti-human collectivist ideology.

An important requirement of human survival and flourishing is individuals’ ability to think for themselves and support themselves by the work of their own minds. A crucial part of such work is the creation of material values, from food we eat to the goods we need to survive and to make our lives better.

In our division-of-labor society, the production and trade of material values has been taken on by profit-seeking business firms. This has made possible the unprecedented level of innovation and prosperity that we enjoy today. That also depends on individualism and individual freedom—and therefore I cringe at the calls for collectivism.

To create and trade material values, business needs freedom, protected by individual rights, particularly property rights. Collectivism takes away such rights and bans or curtails private property, taking away the incentive from individuals to try to improve their lives.

In collectivist social systems, private business is not possible, as property is collectively owned, and individuals are not allowed to keep the products of their work and the wealth they create. Witness the decline in productivity in socialist systems with their collectivized farms and factories, which ultimately leads to poverty and starvation, as in the famines during Mao’s “Great Leap Forward,” under Stalin’s rule, and today in Venezuela.

Even in mixed economies, their collectivist elements spur violations of individual rights, such as taxes, highly progressive income taxation in particular, and other wealth “redistribution” schemes that discourage entrepreneurship, innovation, and wealth creation in general. For examples, consider the highest rate of innovation and wealth creation by business in industries (such as those based on high-tech fields) and jurisdictions with the most economic freedom (such as Ireland and New Zealand). Even in China, the higher level of innovation and prosperity in the recent past is attributable to relatively greater economic freedom, including the private ownership of business.

If we want human flourishing and prosperity, we must object (and voice our objection) to the calls for collectivism—because it kills freedom, business, and creation of material values.