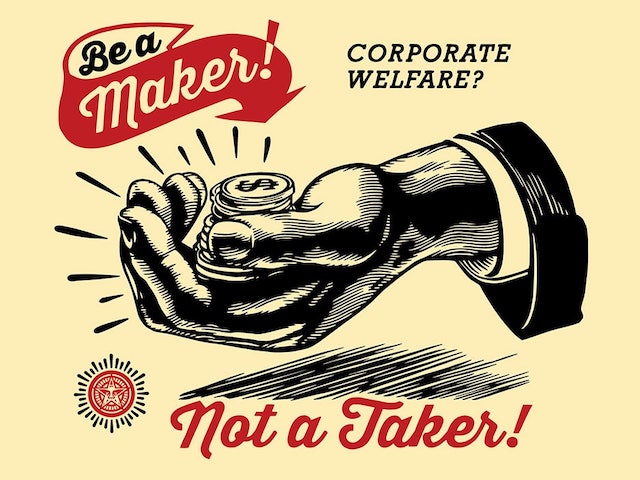 In its recently released budget, the Canadian government announced $6.4 billion of new corporate welfare spending. The aerospace sector will receive $1.2 billion of it over the next five years, Federal Economic Development Agency for Southern Ontario $920 million, forestry companies $92 million, Venture Capital Action Plan $60 million, and $325 million will go to “green” technologies. In addition, together with the provinces, the federal government will give the agricultural sector $3 billion. And the automotive sector will receive $250 million through the Automotive Innovation Fund. You get the picture.

[It does not seem to matter which party is in power—the corporate welfare is handed out by Liberals and Conservatives alike].

Government hand-outs to business—corporate welfare—are immoral, and doubly so. The government forcibly takes the money (also known as stealing) from the Canadian taxpayers, which is the first moral offense. Then the government in its wisdom picks winners and losers in the marketplace: it determines which sectors and industries, or sometimes specific firms, are worthy or in need of a hand-out from the government. This is also immoral, because it distorts the markets and makes the economy less efficient, wasting the taxpayers’ hard-earned dollars.

Companies that could not survive or succeed in a free(r) market get boosted and hang on despite their inefficiency, wasting resources obtained from others by force. Government handouts also prevent the more capable competitors from doing as well as they could do, absent the corporate welfare to the companies  and sectors favored by government.

The best thing the government can do to help businesses compete and succeed is to free the markets: remove impediments to competition (such as regulations and hand-outs) and stop interfering with the economy.  It is free competition that drives innovation in new products and processes, higher quality, and lower prices. The government contributes nothing to innovation and prosperity through corporate welfare, no matter how good its intentions.

As Ayn Rand convincingly argues, the government’s only role, properly, is to protect individual rights against initiation of physical force and fraud. This means only three functions: the armed forces, the police, and the courts (to protect people’s rights in cases of crime as well as contract disputes). The government has no legitimate role in the economy and can do nothing to “help” business to innovate or compete.

Corporate welfare payments by government are clearly immoral. But what about the companies that are the recipients of such hand-outs—are they also immoral?  No, they are not. We live in a mixed economy, not in a free-market capitalism with a limited government that protects the individual rights of its citizens.

For companies to have a chance of surviving and succeeding, they cannot ignore the mixed economy context in which they compete. If the government decides to hand out a slush fund to all the competitors in an industry, it would be self-sacrificial of a company to refuse the money.

However, companies should recognize that government redistributing them money taken by force from taxpayers is not in their long-term self-interest. Such corporate welfare makes less them less able to compete with innovative and efficient companies that do not depend on government largesse and thus diminishes their ability to create wealth.

Free-market competition is in companies’ self-interest. To facilitate free markets, companies should take government hand-outs offered to their group of competitors. That will undermine the mixed economy and facilitate its failure (which, admittedly, could occur through a painful economic crisis).

At the same time, companies—CEOs and other executives as well as board members—should condemn government interference in the economy, including corporate welfare. This should be done through any means available: lobbying the government or the opposition personally, op-eds, letters to the editor, public speaking, activism through industry associations or Chambers of Commerce, etc.

That is the best companies competing a mixed economy can do to facilitate freer markets—and more innovation, prosperity, and human flourishing—in the future.