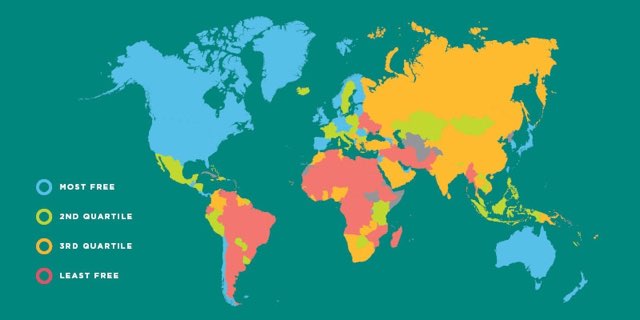 Nassau, Bahamas—The Bahamas ranks 49 out of 162 countries and territories included in the Economic Freedom of the World: 2018 Annual Report, released today by The Nassau Institute in conjunction with Canada’s Fraser Institute.

Hong Kong and Singapore again top the index, continuing their streak as 1st and 2nd respectively. New Zealand, Switzerland, Ireland, the United States, Georgia, Mauritius, the United Kingdom, Australia and Canada (tied for 10th) round out the top 10.

It’s based on data from 2016 (the most recent year of available comparable data) and measures the economic freedom (levels of personal choice, ability to enter markets, security of privately owned property, rule of law, etc.) by analysing the policies and institutions of 162 countries and territories.

The 10 lowest-ranked countries are Sudan, Guinea-Bissau, Angola, Central African Republic, Republic of Congo, Syria, Algeria, Argentina, Libya and last-place Venezuela. Some despotic countries such as North Korea and Cuba can’t be ranked due to lack of data.

For example, countries in the top quartile (25 per cent) of economic freedom (such as the U.K., Japan and Ireland) had an average per-capita income of US$40,376 in 2016 compared to US$5,649 for the bottom quartile countries (such as Venezuela, Iran and Zimbabwe).

And life expectancy is 79.5 years in the top quartile of countries compared to 64.4 years in the bottom quartile.

The Fraser Institute produces the annual Economic Freedom of the World report in cooperation with the Economic Freedom Network, a group of independent research and educational institutes in nearly 100 countries and territories. It’s the world’s premier measurement of economic freedom, measuring and ranking countries in five areas: size of government, legal structure and security of property rights, access to sound money, freedom to trade internationally and regulation of credit, labour and business.

Hong King tops the rankings with scores of; Size of government: 8.59; Legal system and property rights: 7.9; Access to sound money: 9.57; Freedom to trade internationally: 9.32; Regulation of credit, labour and business: 9.44, goals for The Bahamas to work toward.

Economic Freedom of the World measures the degree to which the policies and institutions of countries support economic freedom. This year’s publication ranks 162 countries and territories. The report also updates data in earlier reports in instances where data has been revised.

About The Nassau Institute

Founded in 1995 The Nassau Institute is a research institute – a think tank- that promotes capitalism and free markets. Our mission is to formulate and promote public policies for The Bahamas based on the principles of limited government, individual freedom, and the rule of law.

The Nassau Institute encourages the revival of historical research promoting the free and enterprising commonwealth and countering the political philosophy of statism in all its forms.

The Institute draws from the works of scholars such as Ludwig Von Mises, Friedrich Hayek, Murray Rothbard and others of the Austrian School as well as contemporary economists such as Milton Friedman, James Buchanan, George Reisman and numerous others who have advanced the cause of liberty.

…the task of the entrepreneur consists precisely in finding, in a world of perpetual change, which combination of resources will yield, in the conditions of today, a maximum surplus of output over input value, and in guessing which will do so in the probable conditions of tomorrow, when output values, cost of complementary input, and technology all will have changed. (1940)Ludwig M. Lachmann … (next quote)
%d bloggers like this: