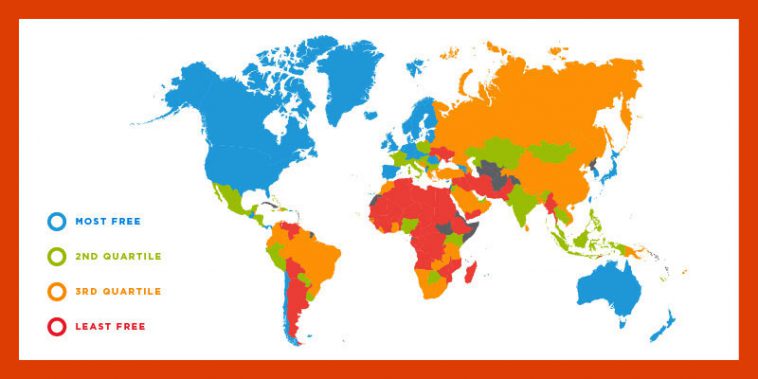 Nassau, New Providence—The Bahamas ranks 58 out of 162 countries and territories included in the Economic Freedom of the World: 2019 Annual Report, released today by The Nassau Institute in conjunction with Canada’s Fraser Institute.

The Bahamas overall ratings dropped from 7.36 to 7.25. The most significant categories where declines occurred was the Size of Government, and the Legal System and Property Rights. (see below)

It’s based on data from 2017 (the most recent year of available comparable data) and measures the economic freedom (levels of personal choice, ability to enter markets, security of privately owned property, rule of law, etc.) by analysing the policies and institutions of 162 countries and territories.

Life expectancy is 79.5 years in the top quartile of countries compared to 64.4 years in the bottom quartile.

Hong Kong’s rank may surprise some, though the index is based on data from 2017. “Intrusion on the rule of law by the Beijing government has negatively affected economic freedom in Hong Kong. While it remains first overall, Hong Kong has been declining since 2009 in the rule of law, the foundation of economic freedom. The current situation is even more cause for concern about whether future residents of Hong Kong will continue to enjoy the highest level of economically freedom on the planet,” McMahon said.

The Fraser Institute produces the annual Economic Freedom of the World report in cooperation with the Economic Freedom Network, a group of independent research and educational institutes in nearly 100 countries and territories. It’s the world’s premier measurement of economic freedom, measuring and ranking countries in five areas: size of government, legal structure and security of property rights, access to sound money, freedom to trade internationally and regulation of credit, labour and business.

Economic Freedom of the World measures the degree to which the policies and institutions of countries support economic freedom. This year’s publication ranks 162 countries and territories. The report also updates data in earlier reports in instances where data has been revised.