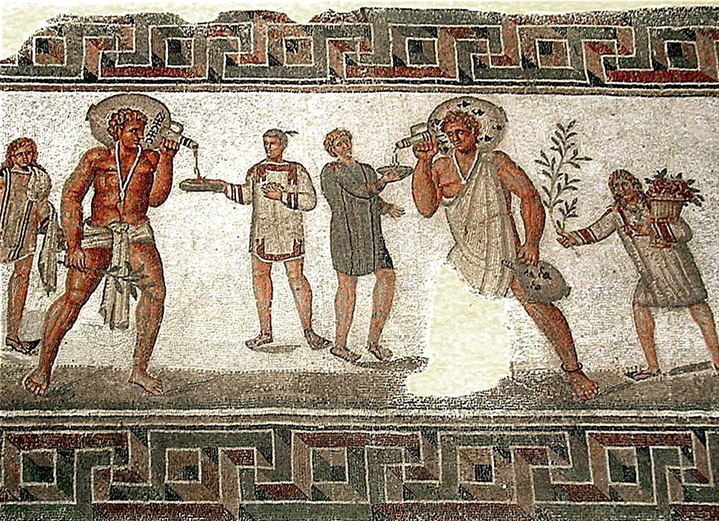 In 449 B.C., the Roman government passed the Law of the Twelve Tables, regulating much of commercial, social, and family life. Some of these laws were reasonable and consistent with an economy of contract and commerce; others prescribed gruesome punishments and assigned cruel powers and privileges given to some. Other regulations fixed a maximum rate of interest on loans of approximately 8 percent. The Roman government also had the habit of periodically forgiving all interest owed in the society; that is, it legally freed private debtors from having to pay back interest due to private creditors.

In 45 B.C., Julius Caesar discovered that almost one-third of the Roman citizenry was receiving their grain supply for free from the State.

The Roman government also set price controls on wheat. In the fourth century, B.C., the Roman government would buy grain during periods of shortages and sell it at a price fixed far below the market price. In 58 B.C., this was improved upon; the government gave grain away to the citizens of Rome at a zero price, that is, for free.

The result was inevitable: farmers left the land and flocked to Rome; this, of course, only made the problem worse, since with fewer farmers on the land in the territories surrounding Rome, less grain than before was being grown and brought to the market. Also, masters were freeing their slaves and placing the financial burden for feeding them on the Roman government at that zero price.

In 45 B.C., Julius Caesar discovered that almost one-third of the Roman citizenry was receiving their grain supply for free from the State.

To deal with the financial cost of these supplies of wheat, the Roman government resorted to debasement of the currency, that is, inflation. Pricing-fixing of grain, shortages of supply, rising budgetary problems for the Roman government, monetary debasement and resulting worsening price inflation were a continual occurrence through long periods of Roman history.

The most famous episode of price controls in Roman history was during the reign of Emperor Diocletian (A.D. 244-312). He assumed the throne in Rome in A.D. 284. Almost immediately, Diocletian began to undertake huge and financially expensive government spending projects.

There was a massive increase in the armed forces and military spending; a huge building project was started in the form of a planned new capital for the Roman Empire in Asia Minor (present-day Turkey) at the city of Nicomedia; he greatly expanded the Roman bureaucracy; and he instituted forced labor for completion of his public works projects.

The Roman government stopped accepting its own debased money as payment for taxes owed and required taxes to be paid in kind.

To finance all of these government activities, Diocletian dramatically raised taxes on all segments of the Roman population. These resulted in the expected disincentives against work, production, savings, and investment that have long been seen as the consequences of high levels and rates of taxation. It resulted in a decline in commerce and trade, as well.

When taxation no longer generated enough revenue to finance all of these activities, Emperor Diocletian resorted to debasement of the currency. Gold and silver coinage would have their metal content reduced and reissued by the government with the claim that their metallic value was the same as before. The government passed legal tender laws requiring Roman citizens and subjects throughout the Empire to accept these debased coins at the higher value stamped on each of the coin’s faces.

The result of this was inevitable, too. Since in terms of the actual gold and silver contained in them, these legal tender coins had a lower value, traders would only accept them at a discount. That is, they were soon devalued in the market place. People began to hoard all the gold and silver coins that still contained the higher gold and silver content and using the debased coins in market trading.

This, of course, meant that each of the debased coins would only buy a smaller quantity of goods on the market than before; or expressed the other way around, more of these debased coins now had to be given in exchange for the same amount of commodities as before. The price inflation became worse and worse as the Emperor issued more and more of these increasingly worthless forms of money.

The penalty imposed for violation of these price and wage controls was death.

Diocletian also instituted a tax-in-kind; that is, the Roman government would not accept its own worthless, debased money as payment for taxes owed. Since the Roman taxpayers had to meet their tax bills in actual goods, this immobilized the entire population. Many were now bound to the land or a given occupation, so as to assure that they had produced the products that the government demanded as due it at tax collection time.  An increasingly rigid economic structure, therefore, was imposed on the whole Roman economy.

Diocletian’s Edict Made Everything Worse

But the worst was still to come.  In A.D. 301, the famous Edict of Diocletian was passed. The Emperor fixed the prices of grain, beef, eggs, clothing, and other articles sold on the market. He also fixed the wages of those employed in the production of these goods. The penalty imposed for violation of these price and wage controls, that is, for any one caught selling any of these goods at higher than prescribed prices and wages, was death.

Realizing that once these controls were announced, many farmers and manufacturers would lose all incentive to bring their commodities to market at prices set far below what the traders would consider fair market values, Diocletian also prescribed in the Edict that all those who were found to be “hoarding” goods off the market would be severely punished; their goods would be confiscated and they would be put to death.

In the Greek parts of the Roman Empire, archeologists have found the price tables listing the government-mandated prices. They list over 1,000 individual prices and wages set by the law and what the permitted price and wage was to be for each of the commodities, goods, and labor services.

A Roman of this period named Lactanius wrote during this time that Diocletian “ . . . then set himself to regulate the prices of all vendible things. There was much blood shed upon very slight and trifling accounts; and the people brought no more provisions to market, since they could not get a reasonable price for them and this increased the dearth [the scarcity] so much, that at last after many had died by it, the law was set aside.”

Roland Kent, an economic historian of this period, has summarized the consequences of Diocletian’s Edict in the following way:

“ . . . The price limits set in the Edict were not observed by the traders, in spite of the death penalty provided in the statute for its violation; would-be purchasers finding that the prices were above the legal limit, formed mobs and wrecked the offending traders’ establishments, incidentally killing the traders, though the goods were after all of trifling value; traders hoarded their goods against the day when the restrictions should be removed, and the resulting scarcity of wares actually offered for sale caused an even greater increase in prices, so that what trading went on was at illegal prices, therefore, performed clandestinely.”

The economic effects were so disastrous to the Roman economy that four years after putting the Edict into law, Diocletian abdicated, claiming “poor health” – a euphemism throughout history reflecting that if the political leader does not step down from power, others will remove him, often through assassination.  And while the Edict was never formally repealed, it soon became a dead letter shortly after Diocletian left the throne.

Michael Ivanovich Rostovtzeff, a leading historian on the ancient Roman economy, offered this summary in his Social and Economic History of the Roman Empire (1926):

“The same expedient [a system of price and wage controls] have often been tried before him [Diocletian] and was often tried after him. As a temporary measure in a critical time, it might be of some use. As a general measure intended to last, it was certain to do great harm and to cause terrible bloodshed, without bringing any relief. Diocletian shared the pernicious belief of the ancient world in the omnipotence of the state, a belief which many modern theorists continue to share with him and with it.”

Finally, as, again, Ludwig von Mises concluded, the Roman Empire began to weaken and decay because it lacked the ideas and ideology that are necessary to build upon and safeguard a free and prosperous society: a philosophy of individual rights and free markets. As Mises ended his own reflections on the civilizations of the ancient world:

“The marvelous civilization of antiquity perished because it did not adjust its moral code and its legal system to the requirements of the market economy. A social order is doomed if the actions which its normal functioning requires are rejected by the standards of morality, are declared illegal by the laws of the country, and are prosecuted as criminal by the courts and the police. The Roman Empire crumbled to dust because it lacked the spirit of [classical] liberalism and free enterprise. The policy of interventionism and its political corollary, the Fuhrer principle, decomposed the mighty empire as they will by necessity always disintegrate and destroy any social entity.”

So, I would argue that the services have been I think disappointing is putting it mildly. They've been disastrous. They've been appallingly bad. Much worse than would have existed, even if no welfare state had been created. In fact I would argue especially if no welfare state had been created, because the systems that existed before were very substantial and growing and improving dramatically. But they weren't perfect, and that is in a way is the great trouble with the development of welfare states. You have a system that's not perfect but actually doing quite a lot of good stuff and then someone comes along and says, "ah, we can make this perfection. And so we can make this much better. We will have free for everybody, high class whatever it is." And the result is you have lower standards and it doesn't work out at all. And that's, the desire for perfection can be very dangerous.James Bartholomew … (next quote)
%d bloggers like this: