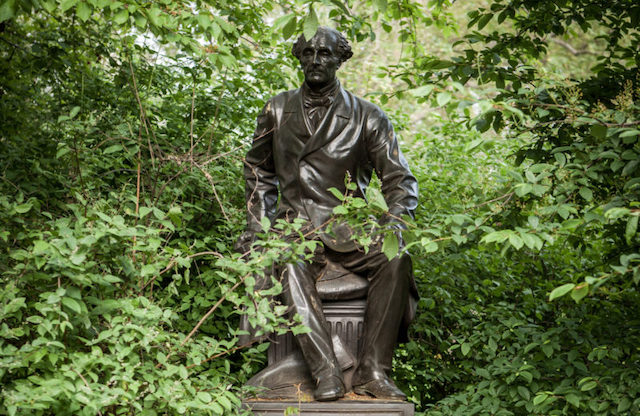 The issue of slavery as part of the American political and economic system has become a new and heated topic, including the place of liberalism in the fight for freedom in general in the 19th century.

In my article, I highlight the vehement opposition to slavery by many of the 19th century liberals by using John Stuart Mill as an example. He insisted that all human beings should be considered to have the same rights and standing in society as free individuals; and he had contempt for those who insisted that blacks needed white overseers.

During the American Civil War, especially, he called for opposing the Southern Confederacy, not because the principle of secession was wrong in itself, but that in this instance its primary purpose was the perpetuation of holding one part of the population in permanent bondage. As he said, if secession was meant to be an expression of the will of the people, “Have the slaves been consulted? Has their will been counted as any part in the estimate of collective volition? They are a part of the population . . . Remember, we consider them to be human beings, entitled to human rights.”

Slavery came to an end through much of the world in the 19th century due to the determination and insistence of many in the classical liberal movement. This needs to be emphasized at a time when the idea and ideal of a market-oriented liberal society is so much, once more, under attack.

John Stuart Mill on Slavery and the American Civil War

One of the most heated and controversial issues today concerns the place of slavery in the history of the United States, and attitudes toward the institution of human bondage in the Western world in general.

Another theme in modern political debate is the nature and role of classical liberalism as a force for human freedom and dignity or as a rationalization for capitalist oppression of not just wage-earning workers, but racial and ethnic groups in modern history.

It can easily happen that under the avalanche of accusations against market liberalism, it may be forgotten how many 19th century liberal friends of freedom in Europe and the United States spoke out against the oppression of not only people in general, but against particular groups whose liberty was denied through such institutions as slavery.

One of the voices for the liberal ideal of personal freedom and civil liberty in the 19th century was the British economist and social philosopher, John Stuart Mill (1806-1873). His most famous articulation of the liberal outlook on these matters is in his Essay on Liberty (1859). He made the case that each and every individual should have the latitude and liberty to live his life as he chooses, in any way that he considers desirable and advantageous, as long as it does not bring harm to another individual’s equal right to do the same.

He warned of three institutional threats to such personal liberty, those being the tyranny of a minority, the tyranny of a majority, and the social pressures of custom and tradition for the individual to conform to community beliefs and modes of conduct and behavior. Absolute monarchy was an instance of the first, relatively unrestrained democracy was a form of the second, and social intolerance and dogmatism were potential instances of the third. (See my articles, “John Stuart Mill and the Three Dangers to Liberty” and “John Stuart Mill and the Dangers of Unrestrained Government.”)

Mill was also famous as a strong advocate of equal rights for both sexes as argued for in his equally famous, The Subjugation of Women (1869). For most of human history, women had been kept legally, politically, and socially in subservient roles in society. Women were as much distinct human beings as any and all men, and as such they were deserving and needed to have the same legal rights and social standing as the male members of society. Not only was this justice for women, but by extending such liberty to the other half of the human population, all mankind would gain and be better off.

It should not be too surprising, therefore, that as an advocate of equal rights for women and a defender of individual liberty against the tyrannies of either minorities or majorities that John Stuart Mill also demanded an end to human slavery and its accompanying attitudes concerning associative relationships.

Even more so, he insisted on justice and humane treatment for all, regardless of whether they were black or white. Mill was an active participant in the famous “Jamaica Committee” of 1866, which demanded that those British political authorities responsible in 1865 for violently suppressing and killing black Jamaicans (including unarmed men, women and children) who were accused of participation in or sympathy for a claimed rebellion against the British crown, be placed on trial for murder. The Committee, Mill concurred, had the aim of “upholding the obligation of justice and humanity towards all races beneath the Queen’s sway,” especially in the face of the brutal and unjust actions of the British officials on the scene on the island of Jamaica.

Such well-known classical liberals of the day as John Bright, Herbert Spencer, and A. V. Dicey, and such other notables as Charles Darwin and Thomas Huxley joined him in this demand. (For an excellent account of these events, see, Bernard Semmel, Democracy vs Empire: The Jamaica Riots of 1865 [1962].)

In his 1850 essay on “The Negro Question,” Mill praised “the great national revolt of the conscience of this country against slavery and the slave-trade,” and those who participated in the anti-slavery movement in Great Britain, “who determined not to rest until the iniquity was extirpated: who made the destruction of it as much the business and the end of their lives.” In Mill’s opinion, “the persons who formed and executed it deserved to be numbered among those, not numerous in any age, who have led noble lives according to their lights, and laid on mankind a debt of permanent gratitude.”

At the same time, he heaped ridicule and contempt on those who presumed that Africans were inherently inferior to whites in terms of work habits and responsiveness to incentives, thus requiring a special white master and black servant relationship (in the face of the end to formal slavery in the British empire in 1834) to assure that blacks in the British West Indies would be appropriately laboring and “productive.”

Mill was adamant that there was no “doctrine more damnable than one” that asserted that “one kind of human beings are born servants to another kind.” A doctrine that tells the Negro: “You will have to be servants . . . to those who are born wiser than you, that are born lords of you – servants to the whites . . .” If blacks seemed to lack certain social and economic qualities and characteristics observable in British whites, Mill suggested that the reasons were far more due to slavery, denial of education, and development of those qualities and characteristics most likely to be developed when men are allowed to be free and responsible individuals, than anything inherent and different in the make-up of the blacks compared to whites.

Mill turned his gaze to the conflict in America between the Northern and Southern states and showed the same sympathies in two essays published in 1862, “The Contest in America” and “The Slave Power,” the latter being a detailed and highly complimentary review of his fellow British classical economist, John E. Cairnes’s, The Slave Power: Its Character, Career and Probable Designs (1862).

The first of the two essays is an appeal to the highest values of a belief in freedom and human dignity among the British people to not allow resentments, angers, and disapproval of various aspects in the American character, plus recent political disputes between the British and Union governments, to result in formal recognition or international support to the southern Confederate government.

At least strict neutrality should be the hallmark of British political policy so as to not tilt the balance in favor of a Southern victory. But Mill was strident that morally the attitude should be to wish to see the defeat of the Southern rebellion, for that was the only position “which becomes a people who are as sincere enemies of slavery as the English really are, and [who] have made as great sacrifices to put an end to it where they could.”

In Mill’s eyes, the Southern secession had little or nothing to do with free trade versus protectionism or the use of tariff revenues collected from southern states for “internal improvements” to advance the development of the northern or western states.

It was pure and simply the preservation of a slave culture and slave society in the South from the loss of access to the “territories” not yet organized as states within the union for slave expansion, and a fear that if new states were admitted in the future to the union as “free” states, it would mean the death knell to slave-state influence and “balance” in the two Houses of Congress over time.

Secession Unjustified When Meant to Enslave Some

“Secession,” Mill said, “may be laudable, and so may any other kind of insurrection, but it may also be an enormous crime” when its purpose is the preservation of holding a portion of their population in perpetual bondage. If secession was meant to be an expression of the will of the people, “Have the slaves been consulted? Has their will been counted as any part in the estimate of collective volition? They are a part of the population . . . Remember, we consider them to be human beings, entitled to human rights.” And he was greatly pleased when at last in 1865, and “at the expense of the best blood of the Free States, but to their immeasurable elevation in mental and moral worth, the curse of slavery has been cast out from the great American republic . . .”

For Mill, eliminating the scourge of slavery as a moral blight on humanity, far more than its economic disadvantages in that in general slave labor is less productive than free labor, is what justified his ethical support for the Northern cause even when it involved abuses and overreaches beyond the actual powers assigned the Union government under the U.S. Constitution.

In the heated and sometimes angry exchanges over the history of slavery and the place of liberalism in the great contest between freedom and bondage in the 19th century, we should appreciate how determined, dedicated, and publicly demanding were many of those classical liberal thinkers in Europe and the United States in their call for an end to the institution of slavery.

Indeed, the classical liberal premise that each individual is a distinct and unique human being, possessing and deserving of the human right to his life and liberty, and that all human relationships should be based on voluntary consent and mutual agreement, were powerful ideas undergirding the case for ending America’s “peculiar institution.” And John Stuart Mill was one of those reasoning voices insisting on its end.