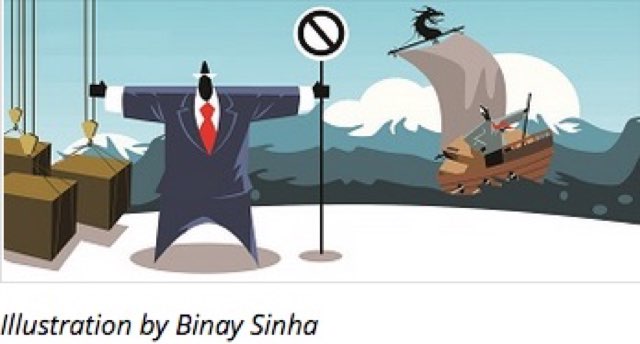 The US never accepted the classical liberal case for free trade

Brexit and Donald Trump’s accession to the US Presidency, many commentators see the demise of a liberal international economic order (LIEO), first created by the UK in the 19th century which died on the fields of Flanders in 1914-18, and recreated by the US after the Second World War.

US LIEOs. The UK’s 19th century LIEO was based on the principles of classical liberalism as expounded by Adam Smith, David Hume and J S Mill: Free trade, laissez-faire, free mobility of capital and labour, the gold standard and international property rights. The US’ post war LIEO was based on more dirigiste principles reflecting the unravelling of the UK LIEO in the interwar years. The rise of welfare states ended the free mobility of labour, as they created property rights in “citizenship” — with a “citizen” having the right to pick the pockets of fellow citizens. This made immigration controls ubiquitous. The international legal order — based on treaties negotiated by Britain — ended with the Bolshevik Revolution and Kemal Atatürk’s repudiation of any international property rights in the name of national sovereignty whilst laissez-faire became the victim of the growing dirigisme in Europe at the turn of the 19th century and in the US with Roosevelt’s New Deal.

Hence, the US LIEO only attempted to resurrect free trade (but based on reciprocity unlike the unilateral free trade espoused by the UK), the gold standard and free capital mobility. Labelling this LIEO as “liberal” was a misnomer, as since 1900 and especially the 1930s, the term “liberal” had acquired the opposite meaning to classical liberalism. As Schumpeter noted in his History of Economic Analysis, “as a supreme irony, if unintended compliment, the enemies of private enterprise have thought it wise to appropriate its label” (p.394). It has come to mean a “social democratic” form of socialism, which has been called “embedded” liberalism by its advocates like Barry Eichengreen.

US at Bretton Woods created three transnational institutions as the pillars of its LIEO: The GATT, which morphed into the World Trade Organization (WTO), to promote free trade; the International Monetary Fund (IMF) to create a quasi-gold standard, and the World Bank to restore capital flows to the Third World, which had been shut out of world capital markets by their interwar debt defaults and the US “Blue Sky” laws banning US banks from lending to foreign governments. In their first few decades these multilateral institutions were fairly successful in promoting the new LIEO. But, by the beginning of the new millennium they had become major purveyors of global illiberalism. (see my “The threat to economic liberty from international organizations”, Cato Journal 23 [5], 2005).

US never accepted the classical liberal case for free trade. It has always looked upon foreign trade as a zero-sum game. It has been mercantilist. Only for a brief period between 1846 and 1861 was there a relatively liberal trade policy, and even then the average ad valorem tariff on the 51 most imported categories of goods was 27 per cent. The US’ trade policy has been based on reciprocity and under GATT and the WTO it has sought to achieve free trade through reciprocal concessions. This irrational principle has made issues of domestic policy spill over into trade policy.

Moreover, unlike Britain’s acceptance of unilateral free trade, which did not require any multilateral agreement, the US route to achieve free trade through reciprocity is more difficult as it has to get unanimous multilateral agreements — as in, true zero-sum negotiations of multilateral arms agreements. This has led to the promotion of preferential trading agreements (PTAs) which have led to a fragmentation of the multilateral trading system. They are often trade diverting, rather than trade creating, and have brought the current WTO Doha round to a grinding halt. With Brexit, there is hope that Britain will go back to the unilateral free trade which it pioneered during its LIEO. Whether the US under Mr Trump will follow suit is in doubt. But despite its current rhetoric US trade policy is still unfinished business. If it repudiates the WTO and its flawed design based on assuming trade is a zero-sum game, but accepts unilateral free trade with genuinely liberal market economies and polities, which would exclude China, it would recreate a genuine LIEO which also meets it strategic objective of challenging China.