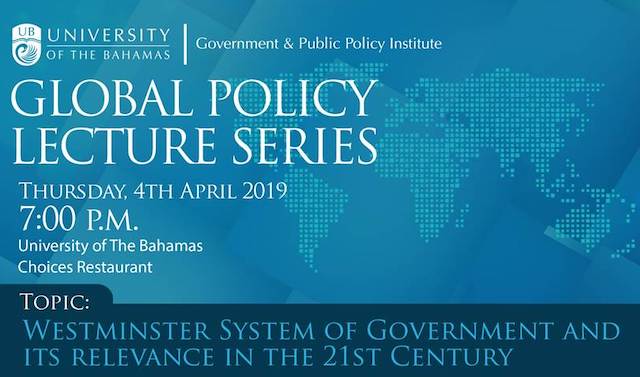 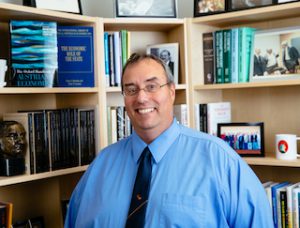 The Government & Public Policy Institute at the University of the Bahamas (UB) presents Professor Peter Boettke in their Global Policy Lecture Series, Thursday, April 4, 2019 at 7:00pm, at Choices Restaurant, UB.

Westminster System of Government and Its Relevance In The 21st Century.

Through an analytical framework strongly influenced by the paradigm of Austrian economics, as well as other intellectual traditions personified by thinkers in the mainline of economic thought—such as Adam Smith, F. A. Hayek, James M. Buchanan and Elinor Ostrom—Boettke has developed a robust political economy research program that expands an understanding of how individuals acting through the extended market order can promote freedom and prosperity for society, and how the institutional arrangements shape, reinforce, or inhibit the individual choices that lead to sustained economic development.

In addition to a variety of journal articles and edited volumes on these and related themes, his most recent book, F. A. Hayek: Economics, Political Economy and Social Philosophy (Palgrave Macmillan, 2018) explores the life and work of the Austrian-British economist, political economist, and social philosopher as well as his impact in academia. Living Economics: Yesterday, Today, and Tomorrow (The Independent Review and Universidad Francisco Marroquin, 2012) is a resource for how teachers and students can engage in the fascinating questions in economics and illuminates the core principles of mainline economics that should guide our thinking. Additionally, his co-authored book with Paul Dragos Aligica, Institutional Analysis and Development: The Bloomington School (Routledge, 2009), delves into the work of Vincent and Elinor Ostrom and analyzes the ascendancy of the New Institutional Theory movement. Boettke is also the author of several books on the history, collapse, and transition from socialism in the former Soviet Union—The Political Economy of Soviet Socialism: The Formative Years, 1918-1928 (Kluwer, 1990), Why Perestroika Failed: The Economics and Politics of Socialism Transformation (Routledge, 1993), and Calculation and Coordination: Essays on Socialism and Transitional Political Economy (Routledge, 2001). In 1998, Boettke assumed the editorship of the Review of Austrian Economics (Springer). Prior to assuming that editorship, Boettke was the editor of Advances in Austrian Economics. Boettke also edits several book series, including The New Thinking in Political Economy with Edward Elgar Publishing and Cambridge Elements: Austrian Economics and Cambridge Series in Economics, Cognition & Society (co-edited with Timur Kuran, Duke University), both with Cambridge University Press

Before joining the faculty at George Mason University in 1998, Boettke taught at New York University. In addition, Boettke was a National Fellow at the Hoover Institution for War, Revolution and Peace at Stanford University during the 1992-1993 academic years and the F. A. Hayek Fellow in 2004 and 2006 at the London School of Economics as well as a visiting professor or scholar at the Russian Academy of Sciences in Moscow, the Max Planck Institute for Research into Economic Systems in Jena, Germany, the Stockholm School of Economics, Central European University in Prague, and the Charles University in Prague. In March 2011, Boettke was a Fulbright Fellow at the University of Economics in Prague, Czech Republic.

At George Mason University, Boettke directs the weekly Philosophy, Politics and Economics (PPE) Workshop, which was established to encourage and explore the latest research at the intersection of these three disciplines by scholars from across the social sciences and humanities. Boettke is an affiliated faculty member in Mason’s Russian Studies Program, has taught at the Mason Antonin Scalia Law School, and has served on dissertation committees in the School of Public Policy. He has also taught in the Honors College Programs at Oakland University, New York University, and George Mason University.

As a teacher, Boettke is dedicated to cultivating enthusiasm for the economic way of thinking and the importance of economic ideas in future generations of scholars and citizens. He is the co-author, along with David Prychitko, of the classic principles of economics texts of Paul Heyne’s The Economic Way of Thinking (13th Edition, 2013, Pearson; formerly with Prentice Hall). His efforts in the classroom have earned him a number of distinctions including the Golden Dozen Award for Excellence in Teaching from the College of Arts and Sciences at New York University and the Mason Alumni Association’s 2009 Faculty Member of the Year award.

In 2005, Boettke received the Charles Koch Distinguished Alumnus award from the Institute for Humane Studies at George Mason University and the Jack Kennedy Award for Alumni Achievement from Grove City College. Boettke was the 2010 recipient of the Association of Private Enterprise Education’s Adam Smith Award as well as Mason’s College of Humanities and Social Sciences Distinguished Alumnus of the Year Award. In 2012 and 2013 respectively, Boettke received a doctorate honoris causa in Social Sciences from Universidad Francisco Marroquin and Alexandru Ioan Cuza University.

Outside of the classroom, Boettke has pursued a parallel career in athletics. A former high school and college basketball and tennis player, Boettke first worked as a tennis teaching professional before pursuing his graduate degree in economics. After graduate school, he began coaching youth basketball and eventually coached at the high school and elite AAU level. Several of his former players went on to compete in college. In 2009, he was inducted as a coach into the local basketball hall of fame in Northern Virginia.

Find out more about Professor Boettke at https://www.peter-boettke.com/