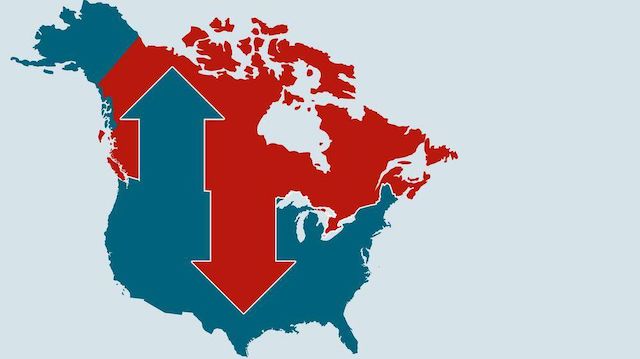 In a recent National Post column, Robert Fulford rightfully lamented the fact that after a quarter century since the United States-Canada Free Trade Agreement was ratified, the trade between the two countries is anything but free.

According to Fulford, only government procurement, a few other processes, and financial services were made more convenient with the so called Free Trade Agreement. Everything else remained as unfree as before.

The usual culprits for such a sorry state are typically considered to be higher costs (due to higher wages, longer transportation distances, interprovincial tariffs and other taxes, etc.) and lower productivity in Canada. But after discovering that Halls cough drops—made in Canada—cost almost twice as much in Canada ($2.87) than in the U.S. ($1.47), Fulford dismissed all the typical explanations as insufficient and pointed his finger at “interest groups, lobbyists, politicians and bureaucrats” who like the “unfair” trade policy and maintain it decade after decade, while the rest of us are helpless to do anything about it.

However, these groups are not the fundamental cause of unfree trade. Nor are the rest of us as helpless when it comes to influencing freedom to trade as Robert Fulford suggests.

The opposition to free trade stems from the mistaken idea that free trade is contrary to the self-interest of the citizens of a country (or a state or a province). In other words, the opponents of free trade fail to grasp that the principle of freedom, which includes the freedom of trade, is essential to a person’s self-interest.

As an example, the Founding Fathers of America were opposed to taxation but favored tariffs (another form of tax). They failed to see that tariffs contradict individual rights they otherwise promoted.  This logical contradiction has perpetuated itself, not only in America, but in most countries in the world. Such illogical thinking fails to integrate self-interest and freedom.

If free trade prevailed, production of softwood lumber—and of all other goods—would take place where it could be done most efficiently, at the lowest cost. This would mean that companies would specialize in providing goods and services where they have a comparative advantage, regardless in which country they are located. It would mean intense competition, innovation, and maximum wealth creation—and translate into economic growth, job opportunities, lower prices, and better quality of products and services. In other words, free trade would serve the interests of everyone: producers, employees, and consumers.

We are helpless against anti-free trade activists, lobbyists, politicians, and bureaucrats only when we fall for their argument that protectionism is in our interest. If we passively accept the idea that our freedom, including freedom to trade, should be limited and if we willingly pay prices twice as high as free market prices, we can only blame ourselves.

Instead, we should think to grasp the connection between freedom and self-interest, and promote the principle of free trade as essential to everyone’s self-interest whenever and wherever we can.